Prof. Hassan's lasting contribution to society at large consists in pioneering the socio-educational empowerment initiatives in North and Eastern India where the minorities lead a life of economic and educational deprivation. The movement he launched in this regard - Vision 2016 through the Human Welfare Foundation (HWF) formed the backbone of institutional support for the drive. It provided schools, houses, public wells, mosques, and medical care facilities. He served as General Secretary of the Delhi-based HWF, Human Welfare Trust, Society for Bright Future (SBF), Association for the Protection of Civil Rights (APCR), and Medical Service Society (MSS). Since 2016, the project has been re-launched as Vision 2026 and is still operational. It has many projects like establishing hospitals, colleges, universities, and interest-free credit societies. Al-Shifa Hospital, Delhi is part of the HWF - Vision program.

Prof. Hassan was the former Chairman of Madhyamam, a leading Malayalam newspaper, and founder secretary of Ideal Publication Trust, publishers of Madhyamam. He had also held the position of Chairman Alternative Investment and Credit Ltd. (AICL).

Born in Kodungallur in Thrissur district, Kerala in 1945, Prof. Hassan had his education in Rouzathul Uloom Arabic College, Farook, and Islamia College Santapuram. A postgraduate in Arabic, he joined the government college teaching service and served in University College, Maharajas College, Kochi, and govt colleges in Koyilandi, Kodenchery, and Kasargod. Prof Hassan, in addition to authoring and translating various books, also was on the panel of editors of Islam Darshanam, an encyclopedic volume published by Language Institute, Kerala. He was a prolific contributor to many periodicals. He was the President of JIH Kerala, during 1995 – 2005, and later Vice-President Jamat-e-Islami Hind. Prof. Hassan had been leading a retired life at his son's home in Kovoor near here, suffering from age-related conditions. He is survived by his wife VK Zubaida, sons Faslurrahman, Sharafuddeen, Anisurrahman, and daughter Sabira.

Expressing condolences on the demise of Prof. Siddique Hassan, JIH President Syed Sadatullah Husaini has said that we have not only lost a great Islamic leader but also lost a man who in many respects was a role model for the youth of the Muslim world.

Recalling the qualities of the departed soul, Mr. Husaini said that his personality was a beautiful marquee of rare attributes such as dynamism, initiative, courage, enthusiasm, selflessness, high morale, the ability of appreciation and utilization of ability and skill, planning and foresight, long-term vision, ability to blaze new trails and evolve with time. Through these qualities, the JIH chief said that Prof. Siddique Hassan strengthened the Islamic cause in India and imparted many rare gifts. “The daily Madhyamam gave a new impetus to the voice of truth and justice in the Malayalam print media and ushered in a new era of media activism. AICL is not just an institution but the foundation of a powerful interest-free loan movement in our country. Through the HWF, a series of brotherhood and cooperation was established between the North and South India, which has now become a powerful movement. We will not forget that HWF was his brainchild. He knew the art of achieving the impossible. He inspired the leading and talented people and the numerous anonymous youth of the movement who spread in different parts of the country. The way he spotted talent and mobilized them was undoubtedly a unique ability to recognize individuals and his uncanny art of winning their hearts would help them achieve the impossible. He played a key role in creating many people who have made significant contributions to the Islamic cause and ensuring their services to it. Prof. Siddique Hassan's name is at the top of the list of elders of the movement from whom I have learned dynamism, steadfastness, perseverance, management, and good manners. He was ill for many years and removed from an active role in public life due to his illness. But even so, his existence was a source of encouragement to many like us. Now they have become a part of history but the story of his life will continue to inspire future generations. May Allah Almighty grant him the highest position in Paradise. May Allah bless him through the charity of the dozens of organizations he helped set up, and through the work of the countless individuals, he helped create. Amen!”, he added.

In a condolence message, former chairman of the Delhi Minorities Commission Dr. Zafarul Islam Khan, said, “I am pained to know of the sad demise of Prof. Siddique Hasan saheb. He was a great visionary and selfless leader. I have lost a personal friend in his departure. My sincere condolences to the HWF and the JIH family.  May Allah grant him maghfirat and high station in Paradise. Amin. Please convey my sincere condolences to JIH leaders and friends.” 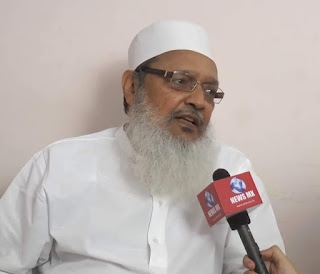 New Delhi, 03 April 2021: Noted Islamic scholar and the leader, Maulana Syed Wali Rahmani, General Secretary of All India Muslim Personal Law Board (AIMPLB), passed away around 2:30pm today in a Patna hospital. He was the founder of Rahmani30 and Sajjada Nashin of Khanqah Rahmani, Monger, Bihar. Maulana, born on June 5, 1943, served as a Member of the Bihar Legislative Council from 1974 to 1996 and also held the post of Deputy Speaker in the Assembly.

Maulana was ailing for nearly a week and was under treatment in a hospital.  According to Emirate Shariah Bihar, the funeral prayer will be offered tomorrow at 11am at Khanqah Rahmani Monger.

Gen. Sec. Maulana Wali Rahmani sahab RA has expired. It is an irreparable loss for the entire Muslim Ummah. Appeal for prayers and patience to all Muslims. Indeed to Allah we belong and to Him we return. @MaulanaUmrain, Secretary AIMPLB

New Delhi (March 17, 2021): Jamaat-e-Islami Hind (JIH) Maharashtra has handed over the keys of the newly constructed houses to the flood victims of Kanwad village in Kolhapur district at a ceremony, attended by a number of dignitaries and officials including the state minister.

Speaking on the occasion, Maharashtra’s Drug Administration and Textiles Minister Rajendra Patil has appreciated the Jamaat-e-Islami Hind for constructing the houses for the flood victims, irrespective of their caste, creed and religion just for the sake of God. The minister said, “the JIH has dedicated itself to serving the people, not to show off but to please Allah.”

In August, 2019, a catastrophic flood had destroyed the entire village of Kanwad, in Shirol town, Kolhapur district. The JIH Maharashtra and the Ideal Relief Committee Trust (IRCT) have built new houses for 34 families. The houses were handed over along with household items like beds, cupboards, dining tables and chairs, kitchen utensils, mixer grinder etc. The JIH has also carried out the repair and rehabilitation works of Urdu and Marathi medium schools of the village in collaboration with the IRCT. The JIH has also vowed to make Kanwad an ideal village.

Presiding over the ceremony, JIH state President Rizwan-ur-Rehman Khan said, “all humans are descendants of one parent. We should support each other during difficult times that will remove the hatred spread among us. For this purpose, we have built houses for our brothers.”

On this occasion, CEO of the District Council (Zilla Parishad) Sanjay Singh Chavan praising the initiative of the Jamaat-e-Islami Hind has said that this is a sign of social love and harmony.

Addressing the gathering, JIH state secretary for the social service department Mazhar Farooq said, "we want to make this village an ideal one. An Ideal village is not created just by improving infrastructure or facilities, but by bringing people belonging to all communities together and creating such an atmosphere where everyone is ready to help others. If we set an example of unity and solidarity, we will see the real image of the prosperous India in this village."

New Delhi, March 16, 2021: Speakers at a Jamaat-e-Islami Hind's (JIH) programme have expressed serious concerns over the downgrading of India's status from ‘the world’s largest democracy’ to an ‘electoral autocracy’ and from a “Free Country” to a “Partly Free Country” in the international reports.  The JIH has held a group discussion here on the topic of the impact of the upcoming Assembly Elections in five states and responsibilities of voters.

Initiating the discussion on the topic, JIH Secretary Malik Motasim Khan has said that elections are very important to a democracy. “Through the elections, people can show their power by choosing their favourite representatives and rejecting the undesirable ones. The people use their voting power to correct their past mistakes and throw out incompetent representatives and this is a great opportunity for them,” he added.

Pointing out that elections are now being used as a tool to divide the people rather than unite them, the JIH Secretary has talked about the present atmosphere where sedition charges are being slapped on the trivial matters, students and journalists are being put behind bars, people are facing troubles only for speaking out on the issues and even questions are being raised on judiciary. Mr.Malik Motasim said, “the atmosphere created by some political parties in recent years, indicates that attempts are being made to disintegrate the people and the country under the guise of elections. This is very harmful for our country. Therefore, recent international reports have branded India as partly free which is heading toward the democratic autocracy.” He was referring to the annual report of Sweden’s V-Dem Institute, which has downgraded India from ‘the world’s largest democracy’ to an ‘electoral autocracy’ while just days before the US watchdog Freedom House’s report graded it from a “Free Country” to a “Partly Free Country”.

Expressing serious concerns over the international reports related to India, senior journalist Mr. Prashant Tandon said, “we can neither deny them, nor call them biased reports as the gravity of the situation of the country is obvious. The democracy is an institution that runs on the basis of the public opinion. Raising issues before the voting is very important in forming a government. Instead of voting on issues like education, health, cleanliness, employment, human rights, development and industry, we vote in the name of religion and caste. Now the politics of polarization is being played on the basis of hatred for some years. This is not good for a democratic country. In such a situation, this is the prime responsibility of the citizens to be alert while voting, keeping in view the interest and development of the country and elect only honest representatives. After sending a representative to the Assembly or Parliament, do not sit idle for five years, but hold them accountable regularly for what they are doing for the country.”

Commenting on the upcoming assembly elections in five states, the senior journalist said, “the ‘corporate media’ is projecting that no party is fighting the assembly elections except BJP. In fact, BJP gets most of the seats from central and western regions of the country and the upcoming elections will be held in the eastern and southern India, where the saffron party has a little presence.”

On this occasion, Firdous Barbhoya from Assam, Imrul Quais from West Bengal and Meher Nowshad from Kerala have thoroughly discussed the present political scenario of their respective poll-bound states.