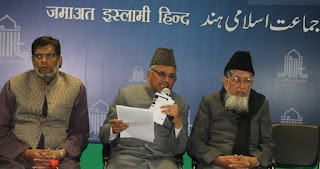 New Delhi, 03 Feb. 2018: Jamaat-e-Islami Hind (JIH) has accused the BJP government of Uttar Pradesh of bias against minorities in the backdrop of the Kasganj violence and subsequent arrests being carried out by the UP police.

Addressing to a press-meet, the Secretary General of JIH Muhammad Saleem Engineer said: “A delegation led by JIH visited Kasganj recently to assess the situation and get first-hand information from those affected by the violence and arson. Jamaat feels that the law enforcement agencies in Kasganj are having a very biased attitude against the minorities, which is reflected in the substantially high number of arrests of youth from the Muslim community.  The CrPC sections invoked against the arrested Muslim youth on charges of inciting and committing violence in Kasganj are also very strict while the real culprits have been let off or charged under very mild CrPC sections so that they can be bailed out easily. We question the Yogi administration, why Tiranga rally was permitted when it was clear that the people behind it were having a communal agenda to vitiate the peaceful atmosphere of the city and create communal strife. We demand a judicial probe into the Kasganj violence and are not satisfied by the order to conduct a SIT probe’’.

Replying to a question on the recent statements by National Minorities chairman Ghayroul Hassan regarding the Babri Masjid and Madrassas the JIH President Maulana Syed Jalaluddin Umari said: “we are not surprised at such statements which are diagonally opposite of mainstream Muslim community opinion as the NDA Central government has appointed such people to these posts who  toe their anti-minority stand’’.

On Union Budget 2018-19, Maulana Umari said: “the allocation towards education and health needs to be increased. Jamaat expects the government to spell out full details on how it plans to implement the various targets it has spelt out in the Budget and come up with data on how much the allocation was actually utilized for welfare of the minorities and weaker sections”.

Here in the following is the full text of the Press Note issued in the press conference:
Kasganj Violence

Jamaat-e-Islami Hind has condemned the well planned and orchestrated violence against the Muslim community in Kasganj, Uttar Pradesh by the fascist and communal forces. Jamaat  saddened by the loss of life in the violence and offers its condolences to the family of the deceased. The anti-social elements incited communal violence in the name of taking out ‘’Tiranga’’ rally in Muslim localities and used abusive language and shouted provocative slogans. Jamaat feels that the violence and arson that followed could have been easily prevented and controlled by the local police but it seems there were some forces who wanted to vitiate the peaceful atmosphere in the city. This incident indicates the total failure of the UP administration to prevent communal flare-ups and the inability of the local police and law enforcement agencies to rein in the anti-social elements. Jamaat is deeply concerned at the subsequent random arrests of Muslim youth and shows the communal bias in the state administration. A delegation of senior Muslim leaders visited Kasganj on 30th of January and met the local people there. They assured them of all possible humanitarian assistance and advised them to work for restoration of peace and normalcy in the city. Jamaat demands an impartial probe by a sitting Supreme Court judge into the incident and immediate arrest of the real culprits. Jamaat warns the citizens of this country to be on the guard against the divisive forces behind the violence who want to polarize society along narrow communal considerations to divert people’s attention from the real economic problems of the nation like growing youth unemployment, poor infrastructure, and lack of education and healthcare facilities. Jamaat appeals to fellow countrymen to maintain peace and unity and resist the conspiracies by fascist forces who wish to divide society, disrupt communal harmony and create enmity between religious communities.

Jamaat-e-Islami Hind feels that the Union Budget for 2018-19 reflects a lack of clear vision for the country and does little to help the youth, their education, the unemployed and the salaried middle class of India. Although the government has announced an increased MSP (minimum support price) of 50% for farmers, it has not spelt out the details of how it plans to do so. The Ashok Dalwai committee  estimated that Rs 6.4 lakh crore investment would be needed for doubling farmers’ incomes but the budgetary allocation for the Ministry of Agriculture and Farmers Welfare has increased by a mere Rs6504 crore. Similarly the ambitious plan for digitizing education with a rupees one lakh crore allocation saw the budget of the National Education Mission to increase by mere Rs 3000 crores. There was no relief on the personal income tax for the middle class.The increase of 1% on education and health cess, is bound to squeeze the incomes of the middle class further. The Long Term Capital Gains Tax on equity and an additional dividend distribution tax on equity mutual funds is also disappointing to small home investors. The government seems clueless on how it will generate the 13 lakh jobs per month to satisfy the growing numbers seeking employment. In 2015 and 2016, the average employment generation has been only been 2 lakh jobs a year. India’s defense expenditure rose by 8.1% of the total budget to 2.16% of GDP. The abolition of Haj subsidy can be correlated to the increase in budget for minorities that saw an increase from Rs 4195 crore to Rs 4700 crore, an increase of around 12%. However the allocation for education and healthcare remains at about 3.7% and 1% respectively. Jamaat expects the government to spell out full details on how it plans to implement the various targets it has spelt out in the Budget.
Email ThisBlogThis!Share to TwitterShare to Facebook