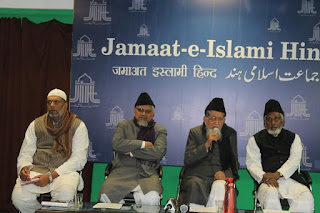 New Delhi: Jamaat-e-Islami Hind (JIH) has questioned the government’s motive for introducing the Triple Talaq Bill but welcomed and appreciated the role of the opposition parties regarding the bill. Addressing a press meet JIH President Maulana Syed Jalaluddin Umari today said: “We appreciate the role of the Opposition parties who did not allow the bill to pass in the Rajya Sabha and demanded that the Bill be referred to a Select Committee. The motive for this Bill seems to be political in nature and its introduction was completely unnecessary after the Supreme Court had invalidated triple talaq. It criminalizes a matter that is purely civil in issue. It is very strange that the government did not deem it necessary to consult the Islamic scholars, Shariah experts, Muslim community, Muslim religious organizations, representatives of Muslim women organizations and even the opposition parties regarding the Bill. Even now the government is dragging its feet over referring it to the Select Committee’’.

Answering a question on the Citizenship amendments bill with reference to the Assam, JIH Vice President Nusrat Ali said: “we oppose the notification issued by the MHA regarding Citizenship Act wherein persecuted religious minorities from neighboring countries would be given citizenship. This would be open discrimination on basis of religion and goes against our constitutional values’’.

Earlier while briefing the media the Secretary General of Jamaat-e-Islami Hind, Muhammad Salim Engineer expressed apprehension over the government’s notification authorizing 10 central agencies to intercept, monitor and decrypt any computer system, “as and when required”. He said that: ‘’the order is in direct breach of the ’right to privacy and is hence unconstitutional and in breach of the telephone tapping guidelines, the (Right to) Privacy judgment and the Aadhaar judgment. We urge all those who wish to preserve people’s freedom and save India from becoming a ‘’surveillance state’’ to come together and debate the way in which we can achieve a balance between safeguarding the individual’s right to privacy and protecting the security interests of the state’’. The Jamaat Secretary General also commented on the recent Bangladesh elections. He said: “the landslide victory handed out to the Awami League gives credence to allegations by the opposition and impartial observers who have termed the polls to be ‘’a farce’’ and ‘’rigged’’. We condemn the manner in which the present regime of Shaikh Hasina has banned certain parties from contesting elections, incarcerated its top leadership with several leaders being hanged on fake and frivolous charges. This dictatorial and undemocratic nature of Awami League government has been exposed by the unnatural election results and Jamaat appeals to all justice loving and democratic forces to unite in forcing the international community to pressurize the Hasina regime to lift the curbs and restrictions on political parties and conduct free and fair elections in the country once again’’.