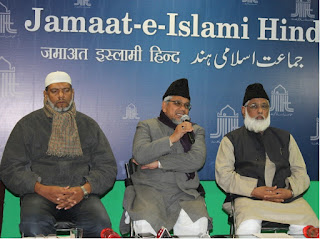 New Delhi: Jamaat-e-Islami Hind (JIH) has criticized the government’s policy towards the Ayodhya issue and said that it is trying to use the Babri Masjid issue to reap electoral benefits.

Addressing the monthly press meet here today, JIH Secretary General Muhammad Salim Engineer said: “We consider the application moved by the Central Government in the Supreme Court regarding the Babri Masjid dispute in Ayodhya as unjust and an emotional step that goes against national interests. It is quite well-known that there are many cases pending in the Hon’ble Courts regarding the Babri Masjid and it is a well-established norm that the litigants in any case wait for the Court to pronounce its judgment and accept it when it comes. If such is the practice then it is extremely bewildering and unfathomable as to why a democratic and secular government is becoming a party to the dispute on its own accord? Because of this strange behavior of the government, the people will be justified to conclude that the government is abandoning its duty of providing justice to its citizens and keeping in view the upcoming parliamentary elections, it is trying to influence the voters for gaining political mileage by enticing them with pipe dreams’’.

The JIH Secretary General continued: “Jamaat feels that the government should not forgo its basic constitutional obligations and must withdraw its application pertaining to returning the excess land from the 67.7 acre land around Babri Masjid. The government must honor the stay by the Court and refrain from taking any step which goes against justice and remains suspicious in the eyes of people and which will sully the image of India internationally. Jamaat wishes to remind the government of its bounden duty to establish peace in the country and work hard for the development and prosperity of our nation”.

Regarding the SP-BSP alliance in Uttar Pradesh, the JIH National Affairs Secretary Mohamed Ahmed said: ‘’ we welcome it and want an alliance of like-minded parties which can defeat the fascist forces. We are in contact with many political players and will be coming out with our own people’s manifesto which we will present to political parties to be included as a charter of demands from the citizens of this country’’. Earlier Media Incharge Arshad Shaikh briefed the media on Jamaat’s stand on the interim budget, Muzaffarnagar case withdrawal by UP government and the Meghalaya Coal Mine tragedy.
Email ThisBlogThis!Share to TwitterShare to Facebook