NIA raids offices of 6 NGOs, including Delhi's HWF, Charity Alliance headed by Dr. Zafarul Islam Khan linking them with funding of 'terrorism, separatism' in J&K HWF says it is a transparent charity org, audited by IT dept, Charity Commissioner annually; Jamaat-e-Islami Hind objects to linking it

NEW DELHI: National Investigation Agency (NIA) on Thursday conducted raids at the offices of two NGOs in Delhi and four others in Kashmir valley, on allegations of them funding “terror and separatist activities” in Jammu and Kashmir. Among the NGOs targeted in Delhi are Charity Alliance and Human Welfare Foundation (HWF). Those raided in Kashmir are Falah-e-Aam Trust, Srinagar, JK Yateem Foundation, Kupwara, Salvation Movement and JK Voice of Victims.NIA in Delhi detained 3 office-bearers of HWF and one from the Charity Alliance. Their interrogations were going on at the Shaheen Bagh Police Station till the filing of the report. It is not immediately clear what kind of interrogations the NIA sleuths are conducting. NIA is also reported to have seized mobiles phones of at least 30 employees of HWF, besides the office computers of HWF’s chief executive officer as also the accountant. The sleuths are also reported to have seized all papers and documents with regard to development projects of HWF all over the country. One of the office-bearers of HWF is above 70-year-old.One of the HWF employees said that the NIA sleuths seized mobile phones of all HWF employees who entered the office.The raid, according to employees began at around 8.30 am. According to locals, there were more than 20 sleuths accompanied with local police at the HWF office.An official of HWF on grounds of anonymity said, “It is all politically motivated. HWF has nothing to do with terrorism or separatism anywhere in India”.The official said that HWF had been carrying relief work all over the country. During Covid pandemic, it distributed food and other items to thousands of persons, irrespective of their religion during the lockdown. “We also rehabilitated hundreds of victims of Delhi northeast riots, by repairing and rebuilding their houses and shops and many of them happen to be Hindus”, the official said. It also gives scholarship to poor students in different parts of the country. HWF, he said, has no offices in Jammu and Kashmir. Charity Alliance is headed by Dr. Zafarul Islam Khan, former chairman of Delhi Minority Commission. According to sources, an accountant of the Charity Alliance was also taken for interrogation by NISA sleuths. Dr. Khan, however, could not be contacted despite several efforts.The Delhi police had booked a case of sedition against Dr. Khan for a tweet in which he had hailed the Govt of Kuwait over the latter “standing with India Muslims”.Okhla MLA Amanatullah Khan also visited the Shaheen Bagh Police Station in solidarity with HWF and Charity Alliance. He, however, did not give any statements to media.Some mediapersons, including Republic TV and other TV channels, linked HWF with the Jamaat-e-Islami Hind (JIH). But the JIH, in a statement, refuted the Republic TV’s allegations. In a statement, the JIH said that “the Foundation (HWF) is a separate legal entity and there is no legal subordination or subsidiaryship of the Jamaat over the Foundation and news media is cautioned not to malign the image of the Jamaat-e-Islami Hind”.“Through this, we also want to convey that this deliberate attempt of maligning the name of the Jamaat by media houses is a matter of serious concern and we will take appropriate legal step if so advised”, the Jamaat statement said.All India Muslim Majlis-e-Mushawarat condemned both the raids. Its president Navaid Hamid said through a tweet that the Mushawarat condemns NIA raids on the offices of  Human Welfare Foundation & Charity Alliance in Delhi connecting them with funding to some Kashmiri organisations. Timings of raids convinced that it’s a divisionary tactic to divert from issues in #Bihar Polls and make it Hindu-Muslim issue. Mushawarat is a federation of various Muslim organisations in India. India Tomorrow/

Statement of Human Welfare Foundation on NIA Raids at its offices 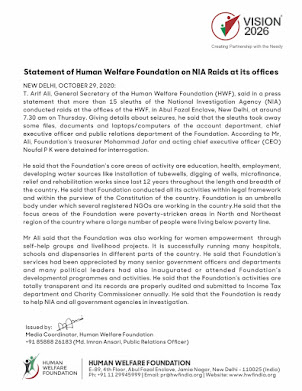 NEW DELHI, OCT. 29: T. Arif Ali, General Secretary of the Human Welfare Foundation (HWF), said in a press statement that more than 15 sleuths of the National Investigation Agency (NIA) conducted raids at the offices of the HWF, in Abul Fazal Enclave, New Delhi, at around 7.30 am on Thursday.

Giving details about seizures, he said that the sleuths took away some files, documents and laptops/computers of the account department, chief executive officer and public relations department of the Foundation.

He said that the Foundation’s core areas of activity are education, health, employment, developing water sources like installation of tubewells, digging of wells, microfinance, relief and rehabilitation works since last 12 years throughout the length and breadth of the country.

He said that Foundation conducted all its activities within legal framework and within the purview of the Constitution of the country. Foundation is an umbrella body under which several registered NGOs are working in the country.

He said that the focus areas of the Foundation were poverty-stricken areas in North and Northeast region of the country where a large number of people were living below poverty line.

Mr Ali said that the Foundation was also working for women empowerment  through self-help groups and livelihood projects. It is successfully running many hospitals, schools and dispensaries in different parts of the country.

He said that Foundation’s services had been appreciated by many senior government officers and departments and many political leaders had also inaugurated or attended Foundation’s developmental programmes and activities.

The media has associated the Jamaat with HWF after the National Investigation Agency (NIA) having conducted raids at HWF’s offices at Abul Fazal Enclave, Jamia Nagar, Okhla, New Delhi, on Thursday.

In a statement to the media, Syed Tanveer Ahmed, Jamaat’s media in-charge, said that many news channels, especially the Republic TV, have projected that HWF is a part of the Jamaat-e-Islami Hind but the fact is that the HWF is a separate legal entity and there is no legal subordination or subsidiaryship of the Jamaat over the HWF. Mr.Ahmed cautioned the news media not to malign the image of the Jamaat-e-Islami Hind. He said that this deliberate attempt of maligning the name of the Jamaat by media houses is a matter of serious concern and we will take appropriate legal step if so advised.