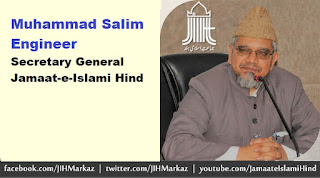 New Delhi: Jamaat-e-Islami Hind has expressed deep concern on reports about the state government of Jharkhand putting a ban on the activities of Popular Front of India (PFI).

The Secretary General of Jamaat, Muhammad Salim Engineer has issued a statement to the media saying: “Jamaat-e-Islami Hind disturbed by reports of the Jharkhand government banning the activities of PFI under section 16 of the CLA Act, 1908. We are highly concerned and condemn this culture of banning organizations. It is a clear violation of the fundamental rights protected by the Constitution and goes against the democratic ethos and basic civil liberties’’.

Salim Engineer continued: “It is the duty of the police and administration to maintain law and order in the state. If the government is seeking action against any individual or organization for any alleged violations of law, then it must be proved in the court of law. However to ban an entire organization is totally unjustified and undemocratic’’.
Email ThisBlogThis!Share to TwitterShare to Facebook