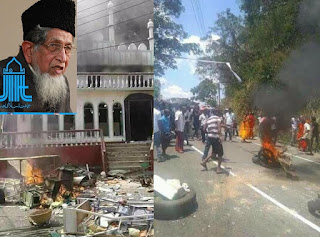 New Delhi: Jamaat-e-Islami Hind has expressed serious concern over the situation in Sri Lanka. In a statement to the media today, JIH President Maulana Syed Jalaluddin Umari said: ''We are deeply concerned about reports coming from Sri Lanka related to imposition of an emergency to control large scale violence against Muslims in the towns around the city of Kandy. We urge the government of Sri Lanka to take stern action against the rioters and quickly address fears regarding the safety and security of Muslims in the affected areas’’.

Maulana Umari stated: “There are certain Sri Lankan lawmakers who are using provocative language while some local religious leaders are inciting violence. They should be apprehended and confidence building measures should be initiated so that normalcy is restored as soon as possible.” He welcomed the statement of Sri Lankan Prime Minister Ranil Wickremesinghe who has condemned the targeting of minorities as “racist and violent acts.” and asked for being aware of the values of peace, respect, unity and freedom.

Regarding India’s role, the JIH President urged the government of India to partner with the Sri Lankans to ensure a swift resolution of the problem and support them to counter the violence against minorities.
Email ThisBlogThis!Share to TwitterShare to Facebook