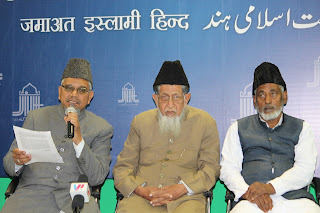 New Delhi, 03 Mar. 2018: Jamaat-e-Islami Hind has expressed deep concern at the recent banking scams in the country like the PNB scam, Oriental Bank of Commerce scam etc. Addressing the at their monthly press meet, the Secretary General of JIH, Muhammad Salim Engineer said: “The country has lost thousands of crores in the PNB scam. Once again the prime accused fled the country and the government is trying to escape its responsibility by shifting the blame to the Central Bank and the bank auditors. Jamaat demands that a Joint Parliamentary Committee, JPC be appointed to find out how a fraud of such magnitude and scale took place and what steps the government had taken to ensure its prevention. The resulting loss of capital due to these scams will ultimately have to be borne by the ordinary tax payer. Our international credit rating is also going to take a hit which will impact foreign investment and ultimately our GDP and growth rate. The government has failed to deliver on its promise of clean and corruption-free governance. Jamaat would also like to remind people that besides a fool proof system of checks and balances to prevent economic fraud and corruption, it is also important to inculcate ethics, morality and fear of accountability before God among the people’’

Addressing to the media, Maulana Syed Jalaluddin Umari JIH President has strongly condemned the deadly bombings and airstrikes which have pounded Eastern Ghouta in Syria since Feb 18th last month by the Syrian forces backed by Russian warplanes. Maulana Umari said, “We are saddened by the news that over 650 people have died and thousands more injured. From media reports it appears that the bombing raids have targeted medical buildings, and doctors who are struggling to keep up with the stream of severely injured patients. A large number of the dead and injured are ordinary civilians and children. We appeal to the international community, particularly the United Nations, Russia, Syria, America, the GCC and all important stakeholders to immediately stop the offensive in Syria and enforce an immediate ceasefire effectively as the war is devastating lives of innocent civilians and reducing the chance of finding a solution to the crisis’’. “We would like to point out that the Syrian regime has failed in protecting their own citizens by targeting civilian areas and they are responsible for Syria’s humanitarian crisis and refugee problem. We feel that it is extremely regrettable that the UN Security Council failed to stop killings despite unanimously agreeing on ceasefire. All stakeholders must compel the Syrian regime to ensure that the medical facilities, humanitarian aid and food supplies reach the survivors. We also appeal especially to the Government of India to bring up the issue of Syria on the international stage and offer whatever support we can to our brothers and sisters of Syria. We also appeal to the Gulf Cooperation Council (GCC) members remember their Islamic responsibility of supporting the cause of humanity and use their resources to stop the powers who have a vested interest in destabilizing the region and want to impose their imperialist agenda by dividing people and nations”, JIH President added.

Salim Engineer also expressed concern at the deteriorating law and order situation of the country, growing incidents of lawlessness, crime against women as well as the increase in number of extra-judicial killings or police encounters. The JIH Secretary General said: “The tendency to resort to extra-judicial killings via police encounters in the quest to reduce crime is a dangerous trend and Jamaat feels that it is very harmful for democracy and civil liberties.  Jamaat appeals to the people of the country to avoid taking law in their hands and eschew violence. Women should be respected and law enforcement must go by the law to handle crime and criminals. It is the job of politicians, social activists, religious organizations and all concerned citizens to rebuild the nation on the principles of peace and tolerance. Jamaat-e-Islami Hind is committed to this cause and invites others to partner it for the noble cause of rebuilding society”.
Email ThisBlogThis!Share to TwitterShare to Facebook