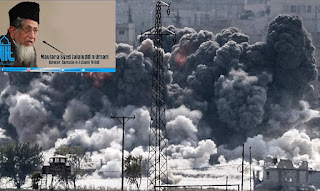 New Delhi: Jamaat-e-Islami Hind has condemned the attack on civilians in Syria, Palestine and Afghanistan. In a statement to the media today, Jamaat’s President Maulana Syed Jalaluddin Umari said: “We are receiving very disturbing reports from Syria about the use of chemical weapons on civilian targets by the Assad regime in the rebel held suburb of Douma, east of Damascus. We express our outrage and condemn it severely. The attack exposes the brutality of the Assad regime and the need for an urgent end to the conflict. The concern showed by the United Nations regarding Syrian situation is welcome but it needs to be pursued further with the cooperation of other countries and efforts should be directed bring to justice those responsible for this heinous war crime.‘’

Maulana Umari said: “the people of Palestine have been carrying out their legitimate struggle against the Israeli occupation. Recently the Palestinians have begunstaging peaceful demonstrations to highlight the occupation of their land and their right to return to their homeland. The Israeli armed forces have so far martyred 30 Gazans while cracking down on these demonstrations which have succeeded in drawing global attention to the Palestinian cause. Jamaat supports the Palestinian freedom struggle, condemns the Israeli aggression on the peaceful demonstrators and appeals to the international community and especially the influential Arab countries to bring an end to the illegitimate Israeli occupation and a just solution to the Palestinian problem.’’.

Regarding reports from northern Kunduz in Afghanistan about civilian casualties including children from a religious seminary the Jamaat-e-Islami Hind   President said: “we condemn any targeting of civilians. Reports showing images of children from a religious seminary being targeted by airstrikes in Afghanistan cannot be ignored and condoned as part of ‘’collateral damage, The number of civilian casualties in the Afghan war are on the increase and there must serious efforts to bring peace and normalcy in Afghanistan as soon as possible’’.

The JIH Chief stated: ’’war is not a solution to problems and disagreements. Islam lays great importance to the sanctity of life and commands us to establish peace and refrain from any injustice even to our opponents. Jamaat prays for the deceased and offers condolences to the bereaved in these countries ravaged by war. We appeal to all peace and justice loving people of the world to contribute their mite in putting an end to these conflicts and bringing about peace and justice in this world’’.