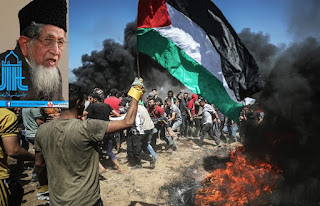 New Delhi: Jamaat-e-Islami Hind has condemned the killing of Palestinian demonstrators by Israel. More than 60 have been martyred and over 3000 injured by the Israeli attack.

In a statement to the media issued today, President of Jamaat-e-Islami Hind (JIH), Maulana Syed Jalaluddin Umari said: “the barbaric attack on the peaceful Palestinian demonstrators by the Israeli Armed Forces is utterly condemnable. The demonstrations were being carried out by Gazans against the border fence between Gaza and Israeli occupied territory since several weeks. It acquired greater intensity following the relocation of the American Embassy from Tel Aviv to Jerusalem after recognizing Jerusalem as the capital of Israel. The number of martyrs and injured shows the complete intolerance and cruel response by Israel towards anyone opposing and challenging their hegemony and illegal occupation.”

Maulana Umari further said: “the decision of the US government to shift its embassy from Tel Aviv to Jerusalem on the day of the formation of Israel goes against United Nations Security Council resolutions and global public opinion and laws. The decision is a disruption and threat to efforts of establishing peace in the region. We oppose the decision as it will yield increased hatred, conflict, violence and suffering in Jerusalem and the Holy Land, moving us farther from the goal of justice for the Palestinians and deeper towards destructive division’’.

The JIH President appealed to the international community to come forward for pressurising Israel to abide by all UN resolutions regarding Palestine and stay away from violence against Palestinians.  He has also appealed to the government of India to play its role in the Palestinian freedom struggle and condemn the Israeli aggression and violence on Palestinian protestors.
Email ThisBlogThis!Share to TwitterShare to Facebook