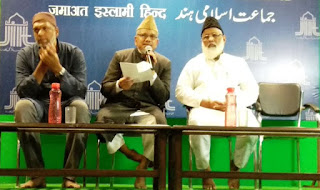 New Delhi, 5th May 2018: Jamaat-e-Islami Hind has expressed deep concern at the reports about the open friction between the senior most judges of the Supreme Court and the variance of the apex court with the Government of India on the issue of appointment of judges.

Addressing to media persons today at its monthly Press-Meet here, the Secretary General of JIH, Muhammad Salim Engineer said: “Jamaat is also perturbed at some of the recent judgments delivered by the judiciary which seemed to go against common perception about the guilty, leaving the victims deprived of justice in those cases. Legacy issues like lack of speedy justice due to huge backlog of pending cases and the increasing unaffordability of pursuing justice continue to plague the Indian judiciary. Jamaat feels that the issues pelt out by four esteemed judges of the Supreme Court in a press conference in January, merit the nation’s attention and it is imperative for the judiciary to remain completely independent of the political class for the protection of democracy. The impeachment motion against the CJI by the opposition parties is also symptomatic about the complete lack of confidence in the integrity of the CJI and calls for judicial impartiality and judicial independence needs to be supported and pursued by civil society. Attempts by the government to block the natural ascent of judges to the Supreme Court who have a reputation of being ‘’independent’’ minded and not prone to succumb to political pressure are a cause of concern. Jamaat feels that the Indian judiciary is at the crossroads and appeals to all stakeholders to rise above narrow parochial interests and rectify the judicial system before people start losing faith in it. Judiciary is one of the most critical arms of our democracy and any weakening therein will only strengthen autocracy.”

Welcoming the government ordinance awarding death penalty to those convicted of raping girls below the age of 12 years, Salim Engineer said, “Jamaat supports the Ordinance as it allows the setting up of new fast-track courts and installation of special forensic kits in all police stations and hospitals to expedite investigation in rape cases. Jamaat feels that capital punishment is necessary to deliver justice to the victim and also act as a deterrent for such heinous crimes. It has been demanding death penalty for every rapist irrespective of the age of the victim. Jamaat feels that strict penal laws alone cannot put an end to this menace. Hence Jamaat also demands a complete ban on alcohol and pornographic videos, as they too aid and abet the growing incidents of crime against women.”

Responding to a question on the ongoing trouble in AMU, the JIH Secretary General said: "it is a ploy by fascist elements to polarize society on communal lines. They hope to divert people's attention from the real issues and hide the failure of the government on all fronts''.

On the question of which party will Jamaat support in the upcoming Karnataka assembly polls Salim Engineer said: ''Jamaat is part of the Muslim Muttehda Mahaz which is doing a constituency wise survey and would come out with a list of candidates that it will support. The policy is to support secular candidates with clean image and who is capable of defeating the communal party''.

On the issue of some anti-social elements not allowing Friday namaz in public places in Gurgaon, the JIH Secretary General said: ''this must be tackled at the local level with the help of the police and administration. It is another brazen attempt to polarize society and vitiate the peaceful atmosphere of the country. Those who remained calm in the face of such provocation should be lauded and police must crackdown on these anti-social elements'

Salim Engineer condemned the attack on civilians in Syria, Palestine and Afghanistan.  He said, “there are very disturbing reports from Syria about the use of chemical weapons on civilian targets by the Assad regime. Jamaat expresses its outrage and condemns it severely and we also condemn the recent aerial attack on Syria by US, France and other nations. It is a clear violation of international norms to respect the sovereignty of any country. We urge the UN to intervene and stop these attacks and mass killings of civilians in Syria by both the foreign forces and the Assad regime.”