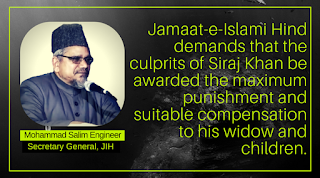 New Delhi: Jamaat-e-Islami Hind (JIH) has condemned the lynching of Siraj Khan by a violent mob in Satna, Madhya Pradesh.

In a statement to the media today, JIH Secretary General Mohammed Salim Engineer said: ‘’ We condemn the lynching of Siraj Khan. Media reports suggest that he was mercilessly beaten to death on suspicion of slaughtering a bull. This is absolutely unacceptable and shameful. There must be someone who must be held accountable besides the ‘’lynch-mob’’ as there seems to be no end to this series of lynching men from the minority community on charges of slaughtering bovines or possessing beef. The usual modus operandi of those who are supervising these hate crimes from the background is to first kill, then glorify the killers, frame charges against the victims and ensure that there is no condemnation by anyone from the government. This attempt to ‘’normalize’’ lynching over beef issue is most sinister and is extremely damaging for the country’’.

Salim Engineer averred: ‘’ we wish to remind our central as well as state governments of their moral and constitutional responsibility; it is their foremost duty to protect the lives and properties as well as the honor and dignity of the citizens. They must remember that the prayers of the oppressed always invites divine wrath and by condoning such crimes they are turning the public opinion against their non-performance in governance and thus preparing their political oblivion. Jamaat-e-Islami Hind demands that the culprits of Siraj Khan be awarded the maximum punishment and suitable compensation to his widow and children. The state government must condemn the incident and ensure that no glorification of Siraj’s killers take place. Jamaat appreciates the role of civil society in resisting these lynching incidents and supports legislation that will put an end to this menace’’.