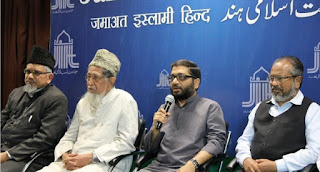 New Delhi: Jamaat-e-Islami Hind’s newly-elected Ameer (President) Syed Sadatullah Hussaini has called upon the Muslim youth to “become assets for the nation and not liability.”

Addressing the media at Jamaat’s headquarters today, in his maiden press conference as Ameer of Jamaat-e-Islami Hind, Syed Sadatullah Hussaini said: “Our community should strengthen their relations with all religious communities, including Hindus, Sikhs and Christians. Communal divide is growing in the society due to communal politics.Youth should take note of the current situation. They should empower themselves with education. They should become assets for the nation and not liability.As Muslims, we should spread Islam’s message of peace through our words, deeds and character. Islam is the torchbearer of peace and goodness’’.

When asked about his message to the people of India on the upcoming Lok Sabha elections, the new JIH President said “Vote on development issues and not on the basis of emotive issues. Some political parties are trying to polarize society on communal and divisive issues. We support those parties or candidates who are in position to defeat forces that practicecommunalism and divisive politics”.

Earlier on the 6th April, the Council of Representatives (an elected all India body consisting of 157 JIH members of which 30 are women) elected 45 years old Electronics and Telecommunication engineer Syed Sadatullah Hussaini as their new chief for a four-year term. He was the Vice President of JIH in its earlier term and member of its Central Advisory Council. He also led Students Islamic Organization (SIO) as National President for two consecutive terms. He has authored 12 Books and has written more than 200 articles in Urdu and English.

In the press meet, Jamaat released the resolutions adopted by its Council of Representativesin its term meet which are as follows:

Parliamentary Elections: This meeting of RC of JIH underlines the importance of parliamentary elections, currently in process. Masses must make correct choices to ensure in our country, the continued existence of democratic functioning, social cohesion and peace. Unfortunately, the current ruling dispensation has displayed consistently negative tendencies; during its tenure, the ruling party has damaged rule of law, autonomy of institutions and impartiality of judiciary. The government brought ordinances frequently, injuring the spirit of popular legislation. The party has promoted hatred and communal conflict. Its ill-advised moves of GST and demonetization have irreparably harmed country’s economy…

Kashmir Situation:RC expresses its concern over bloodshed and lawlessness in Kashmir. The RC appeals to masses, political sections and rulers to make genuine efforts to restore peace and bring normalcy. The RC reminds all stake holders to respect rule of law and abide by healthy traditions. Whatever be the compulsions, violation of human rights should not be tolerated. The RC reminds rulers that unjustified arrests, curbs on social activities, banning of peaceful organizations and oppressive measures, cannot bring peace in Kashmir; rather such actions are counter-productive….

Incident of NewZealand: The unfortunate incident of Christchurch, New Zealand has been widely condemned. RC shares this widespread feeling. In the terrorist attack on two mosques, fifty people, including women and children were killed and many more injured. The RC prays to Almighty to grant forgiveness to martyrs and speedy recovery of the injured and consoles the survivors and their families. RC records its appreciation, in particular for the Prime Minister of New Zealand and media. We expect that other governments would emulate this example. The incident shows that Muslims should not be blamed for terrorism. ….

Palestine :   RC session condemns the continuing Israeli aggression against people of Palestine and neighboring Arab countries. In particular, aggressive stance on Golan heights and shifting capital to Jerusalem are most reprehensible. America and its allies’ blind support to Israel is most deplorable. International forums have not taken any concrete steps to check Israeli aggression. RC session reminds Muslim countries, Arab League and OIC that the real solution of Palestine crisis is establishment of fully independent state of Palestine. The whole Muslim world should work for this aim.
Email ThisBlogThis!Share to TwitterShare to Facebook