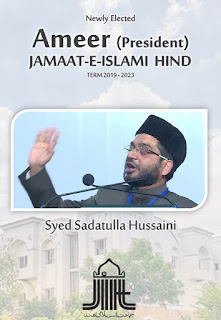 New Delhi 7 April 2019: Syed Sadatullah Hussaini has been elected Ameer (National President) of Jamaat-e-Islami Hind. The 157 member Markazi Majlis-e Numanidgan, (Council of Representatives) of which 30 were women assembled at the Jamaat headquarters from the 3rd April 2019. The Council of Representatives discussed and carried consultations within the framework of the Constitution of Jamaat and elected it’s new Ameer for a four-year term.

Mr. Hussaini was earlier the (Naib Ameer) Vice President of Jamaat-e-Islami Hind and is also the former National President of Jamaat’s student organization the Students Islamic Organisation (SIO) of India. Hailing from Nanded Maharashtra, he is currently based in Hyderabad, Telangana. He holds a Bachelor’s degree in Electronics and Telecommunications Engineering and has written various papers and books on Islam and Islamic Movement.

Members of the Council of Representatives, those related to various organizations running in the Jamaat campus, well-wishers of Jamaat from all over the country and various community leaders prayed for granting steadfastness to the newly elected Ameer of Jamaat-e-Islami Hind.
Email ThisBlogThis!Share to TwitterShare to Facebook