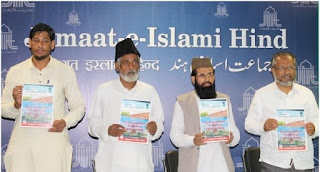 New Delhi, 8 Aug. 2019: The Central Educational Board of Jamaat-e-Islami Hind has raised various questions over the draft National Education Policy 2019 and sent its suggestions to the HRD Ministry seeking changes in the draft. The ministry had made the draft NEP public in June this year and sought suggestions and feedback from public till August 15.
Addressing to a press conference held here today, Mr. Nusrat Ali, chairman of the Central Educational Board of the Jamaat, while releasing its report on NEP 2019, said “the Jamaat takes care of the issues of public importance. It had sent recommendations to the committee which drafted the NEP 2019. Now it has sent suggestions to the HRD Ministry.”

“The draft NEP 2019 is rife with contradictions and omissions and it damages the constitutional structures and values and promotes commercialization of education,” he said.

Mr. Nusrat Ali said: “It is not clear from the draft NEP as to which Constitutional values are to be taught in classes. The draft says it is carrying recommendations from the previous NEP reports but it is not known if those recommendations were useful or not. The NEP 2019 also does not talk about the current education situation in the country.”

Mr. Ali was accompanied by some top leaders of the Jamaat, including Mohammad Jafar, Vice President and T Arif Ali, Secretary General. Inamur Rahman, Assistant Secretary of Jamaat’s Education Department was also present at the release of the report.

Regarding the ancient Vedic education system recommended in the NEP 2019, the Jamaat’s board in a statement said: “References are made throughout the draft to the ancient Vedic education system. It actually was a model that promoted exclusion by limiting access to education to certain groups. The NEP “must refrain from homogenizing India’s heritage as being representative of a particular religion or certain races.”

“If the policy intends to promote “Indian knowledge system”, it should encompass all contributions from different religious, regional, and linguistic communities. They are inalienable part of the Indian knowledge tradition,” it added.

“The draft NEP favors Sanskrit and Hindi and wants to impose them over all citizens. This is gross violation of the Constitution. There should be a two-language formula, (mother tongue and English,) along with the option of studying a third language of either religious or cultural significance to the students as per Articles 29(1), 350A and 350B of the Constitution,” it said.

NEP Should Not Promote Centralization:
The Jamaat also raised the issue of centralization in regard with NEP 2019 and demanded de-centralization and respect to federal structure of the country.

“The proposed centralized bodies such as RSA, NTA, NRF, etc., under one command are against the federal structure of Indian Union. Such centralized bodies under one command will inevitably fall prey to the political expediency of ruling parties. Education has been in the State List and in the Concurrent List since the 42nd Amendment and hence these bodies will be in gross violation of Constitution.”

Talking on this aspect, Mr. Nusrat Ali said: “Prime Minister should not be chairman of these bodies. Rather, academicians or experts should hold such posts.”

We Are Not Against Private Schools, But Privatization Of Education:

Addressing the media, Mr. Nusrat Ali categorically said: “We are not against private schools, but we are against privatization of education system. There should be a measure for check and balance.”

The NEP 2019 takes a “deeply contradictory approach towards increasing commercialization of education in India. While the draft attests the “public good” nature of education, it does so while positing a commercialized form of education throughout the draft.”

“Increasing commercialization has led to increase in corruption in such forms as “donation” and “capitation fee”. There are private contracts for syllabus textbooks. They should be abolished to prevent expensive retailing by private publishers. Regularization of educational institutions should be ensured in terms of licensing with reference to fee-capping tuition and hostel fees,” suggested the Jamaat.

Easy Process for Scholarship
“Ease of access must be ensured by reducing the number of documents required” for getting scholarships from government. The process should be made simpler and free of cost. New regulations are not suitable i.e. CBSE-UGC NET requirement for Maulana Azad National Fellowship (MANF) for minorities and Rajiv Gandhi National Fellowship (RGNF) for SCs and STs. They reduce the accessibility of intended beneficiaries to higher education. These regulations must be scrapped with immediate effect. The number of fellowships should be increased,” suggested the Jamaat’s education board.

Collection of Specific Data about Students Wrong:
“The NEP 2019 recognizes the need for evolving a set of strict guidelines related to data analysis, to prevent misuse of the same. Nonetheless, it lacks clarity on the issues of privacy, or the laws and standards associated with data handling and protection. This issue must be addressed before attempting any large-scale data collection, usage or storage related to teachers and students. The Right to Privacy judgment upheld privacy as a fundamental right under Articles 14, 19, 21 of the Indian Constitution. Considering this judgment, the draft policy should strictly respect privacy while ensuring security and transparency.”

“The draft NEP states that URG students will be tracked. There should be no such tracking. Assessment should be conducted based on performance parameters specified by institutions themselves. No specific data of any student should be collected, stored, or shared,” said the Jamaat.

National Commission for Minority Educational Institutions:
The Jamaat’s education body also raised the issue of defunct National Commission for Minority Educational Instituttions (NCMEI). During the Congress-led UPA regime, this body was very active and accorded minority status to hundreds of educational institutions, but it has been virtually defunct for last some years.

“The National Commission for Minority Educational Institutes (NCMEI), is a statutory body under the act of Parliament. It must be strengthened and affiliation granted by it must be recognized accordingly and implemented equally across the nation,” demanded the Jamaat.
Email ThisBlogThis!Share to TwitterShare to Facebook