New Delhi: Jamaat-e-Islami Hind’s President Syed Sadatullah Hussaini has said that the pattern of Delhi violence clearly indicates that it was preplanned in which lives, businesses and properties of Muslims were specifically targeted.

Talking to media here today on Delhi violence, the Jamaat-e-Islami Hind chief said, “the quantum, method of execution and ferocity of the attacks on the localities indicate a meticulous planning, weapons training given to attackers with a specific objective of targeting the Muslim community, their businesses, properties and places of worship.”

Talking about the role of the PM and the CM of Delhi, Mr. Hussaini said: “Over 50 people have been killed and hundreds injured and hundreds of homes, shops were looted and torched and thousands of people became homeless. This all happened just a few kilometers from the PMO. It is very shocking and shameful that Prime Minister and Chief Minister are not yet visiting the affected people. This is the minimum humanitarian level that is expected.”
On asked if the Shaheen Bagh protests should be discontinued as it has led to violence, the JIH President said: “It is very dangerous and condemnable to link protests with violence. Dissent, disagreement and peaceful protests are a sign of a healthy democracy and linking it with violence is not correct. Managing the protests is the job of law enforcement agencies but the violence that was perpetrated in North East Delhi is highly detestable and a much bigger issue. Regarding Shaheen Bagh protest, right now the courts are seized of the matter so one should not comment on its legality. However, we feel that it was the duty of the government to engage with the protestors, talk to them. No government representative was sent. We request the media to focus on the violence and not link it to protests.”
On asked about whom was behind the riots, the JIH chief said: “It is the job of the police to find who was behind the violence but everyone knows who is peddling the ideology of hate and polarizing society. The provocative speeches by some politicians sparked the violence. But the role of the police as can be seen in various videos and reports has been very disturbing.”

On the question of upcoming NPR, Mr. Hussaini said: “NPR is linked to NRC which is highly divisive for the country. Hence we urge people to avoid participating in the NPR exercise.”

Over reports of the ban on two Malayalam Channels, the Jamaat chief said: “We condemn the ban of Media-One and Asianet. The government failed to act on channels that spout hate but banned those who reported without fear and favor. It shows that the government wants to control the media narrative and it is a dangerous trend that must be resisted.”


The JIH President laid down certain demands regarding the Delhi 2020 riots namely:
1.   An enquiry under the Delhi Minorities Commission should be constituted to look into the entire episode of violence. The enquiry should be completed within one month, it’s report should be made public and its recommendations must be implemented.


2.   The politicians who were responsible for provoking violence should be immediately arrested.


3.   The Prime Minister must visit the relief camps housing the victims and break bread with them as a symbol gesture of empathy and compassion.


5.   The Delhi Police must take action against their own officers who have indulged in atrocities on innocent citizens, women and children.


6.   The Delhi Police must come out with a complete list of all those who are detained and arrested in the wake of these riots.


7.   The Delhi Police must be given hundred days to arrest all those accused of murder/ killing/ lynching/ torching to death of innocent citizens regardless of caste and creed.

Earlier the Vice President of Jamaat, Muhammad Salim Engineer briefed the media about the riots and the relief and rehabilitation efforts. He explained: “Jamaat-e-Islami Hind has been visiting the riot-affected from day one and trying to help the needy by providing emergency relief. The Jamaat has set up a control center to coordinate its relief activities that are being headed by JIH National Secretary - Mohammed Ahmed. The Jamaat is carrying out the relief and rehabilitation activities in a coordinated and phased manner. Some of the major activities include carrying out a survey and assessing the scale of damage, helping the victims to complete the documentation required for claiming the government-announced benefits and psychological counseling of the victims. Jamaat will establish a temporary hospital at our control center for those who require medical attention. Jamaat is also helping in the work of registering FIRs and legal prosecution. The cadres of Jamaat and its associated organizations have a team of dedicated volunteers including women and girls who are playing an active role in all our efforts.” 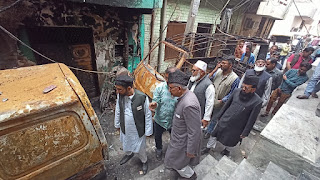 Some of the specific relief work being carried out includes: