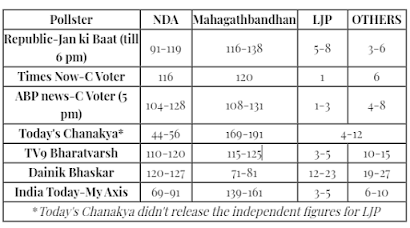 Mahagathbandhan, opposition coalition led by RJD’s Tejashwi Prasad Yadav, could win Bihar Assembly Election 2020, several exit polls indicated on Saturday as the three-phased elections ended. Mahagathbandhan or Grand Alliance is projected to get about 120 seats in the 243-member house by the Times Now C-Voter exit poll. Republic TV-Jan Ki Baat projected 118-138 to RJD alliance, 5 to 8 for LJP and said that others may get 3 to 6 seats. ABP C-Voter exit poll said that Grand Alliance is likely to get anywhere between 108-131 seats in the Bihar assembly. LJP, according to ABP C-Voter, could win 1-3 seats. Mahagathbandhan could get 108-123 seats, NewsX-DV Research projected. Grand Alliance could win 180 seats, according to Today’s Chanakya.NDA fronted by chief minister Nitish Kumar could fall short of a clear majority in the elections. Times Now C-Voter exit poll said the NDA could end up with only 116 seats, seven short of the majority mark of 122. The Republic TV-Jan Ki Baat exit polls projected anything between 91 and 117 seats for the NDA, while the ABP C-Voter exit poll indicated the NDA could get between 104 and 128 seats in Bihar Assembly Election 2020. According to NewsX-DV Research, Nitish NDA could get 110-117 seats. Among the pollsters, Today’s Chanakya indicated just 55 seats for NDA.Today’s Chanakya exit polls also suggested that Tejashwi Yadav-led Mahagathbandhan would be far ahead of the ruling NDA with 44% vote share. The NDA’s vote share was pegged at 34%, it indicated.India Today-Axis My India added that the Tejashwi Yadav had emerged as the first choice for the chief minister’s chair with support from 44% respondents. Nitish Kumar, who has been Bihar’s chief minister for 14 years, came next with 35% respondents supporting his return for another term. LJP’s Chirag Paswan was the first preference for just 7% people, it added. There was a 55.22 per cent turnout in Phase 3 of the polls, the Election Commission said today. In the last elections in 2015, the total turnout was 56.66 per cent. Hindustan Times  / NDTV

New Delhi: The opposition Tejashwi Yadav-led opposition alliance in Bihar will win the most seats in Bihar and even cross the majority mark, with Chief Minister Nitish Kumar's NDA placing a distant second, an aggregate of opinion polls predicted on Saturday after three-phase voting completed in the state.NDTV's poll of polls says the opposition coalition will win 128 of Bihar's 243 seats and the NDA, 99. Chirag Paswan's LJP is given six seats. Bihar results will be announced on November 10.Any party or coalition needs 122 for a majority in the 243-seat Bihar assembly. A disclaimer - exit polls often get it wrong.The third and final phase of assembly elections concluded today in Bihar in which stakes are quite high for Chief Minister Nitish Kumar, who is up against multiple rivals, including former ally Chirag Paswan. NDTV

Tejashwi Yadav-led Mahagathbandhan is likely to storm to power in Bihar with the opposition alliance expected to win 139-161 seats in the 2020 Bihar assembly elections, the India Today-Axis My India exit poll has projected. As per the projections of the exit poll, the Mahagathbandhan will be able to garner a comfortable majority in the 243-member House and secure 44 per cent votes. On the other hand, the National Democratic Alliance - comprising the JD(U), BJP, HAM, and VIP - are projected to win 69-91 seats and secure 39 per cent votes.

The exit polls will be key in deciphering early trends to project a winner — whether Nitish will be granted a fourth straight term or if the electorate are placing their faith in the 'new wave' brought on by Tejashwi's leadership in the RJD. The pollster has released its survey data collected till 5 pm toady. The survey claims that a hung house cannot be ruled out as both alliances will be in a neck and neck battle. The NDA is projected to get 104-128 in the 243-member house, whereas Mahagathbandhan could ger 108-131 seats. The magic number in Bihar Assembly is 122

As we still await the outcome of Exit Poll results, here is a glance at a pre-poll opinion survey.The Opinion survey by C Voter had predicted a pro-incumbency result, suggesting that Janata Dal (United) president Nitish Kumar will retain the chief minister's post despite abysmal approval ratings. Pollster CVoter had published these after speaking to 30,678 people across all 243 seats between1 and 23 October.

The Shivraj Singh Chauhan government will survive the bypoll test as India Today-Asix My India Exit Poll predicts that the BJP will win 16 to 18 seats out 28 that went to bypoll on November 3. The predicted vote share for the saffron party will be 46 per cent.

Out of the seven seats that went to bypolls in Uttar Pradesh, the BJP is likely to win on five to six seats, while SP may win on the remain one or two with BSP having a chance on one seat, India Today-Axis My India Exit Poll has predicted. Congress is not likely to open its account in UP Bypolls, the poll has predicted.

The BJP is likely to shine in Gujarat Bypoll as well. As per the India Today-Axis My India Exit Poll prediction, the BJP will secure six to seven seats out of eight that went to bypoll after sitting Congress MLAs defected. Congress is likely to retain nil to one seat. The saffron party's vote share is predicted to be 49 per cent, for Congress it is likely to be 40 per cent with 11 per cent votes going to others.