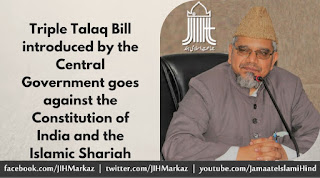 New Delhi: Jamaat-e-Islami Hind has termed, the bill introduced by the Central government and passed by the Lok Sabha regarding triple talaq as unnecessary and against the Shariah and the rights of women. The Bill (The Muslim Women (Protection of Rights on Marriage) Bill 2017) proposes a punishment of 3 years along with a fine for husbands who give unilateral instantaneous ‘’triple talaq’’ to their wives in one sitting.

The Secretary General of Jamaat-e-Islami Hind, Muhammad Salim Engineer in a statement today said, “Not only is this Bill against Article 25 of the Constitution of India which guarantees religious freedom but also goes against the recent judgement of the Supreme Court on the issue of triple talaq. It is being told that the Bill has been introduced to protect the rights of divorced women, but when the triple talaq itself shall not be legal and a valid form of divorce and (pronouncing triple talaq) will not result in a divorce, then how can a punishment be awarded for the same? Then in article 5 of the Bill it is mentioned that the husband shall take the responsibility of maintaining the divorced wife and his children. The question that arises is that when the husband who issues triple talaq will be behind bars, how would he be able to take care of his divorced wife and children? Then after spending three years in jail, how could it be expected that the husband would be able to resume a happy married life with his wife?”

Engineer Salim said, “The government declared that it is introducing a Bill regarding the Shariah laws. But, strangely, the government did not deem it necessary to consult the Islamic scholars, Shariah experts, Muslim community and Muslim religious organizations and representatives of Muslim women organizations. After the Supreme Court judgment regarding triple talaq there was absolutely no possibility nor need for such a Bill. According to the legal experts this Bill goes against Articles 14, 15 and 25 of the Constitution of India.”


The Secretary General of Jamaat said: “We wish to point out to the Government of India that it should not interfere in the Shariah and must refrain from furthering this Bill. We also wish to express our disappointment at the support offered by certain Opposition parties to this Bill. We appeal to them to openly oppose this Bill when it is introduced in the Rajya Sabha.
Email ThisBlogThis!Share to TwitterShare to Facebook