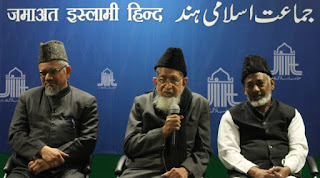 Jamaat hopes to get justice from SC in Babri Masjid case

New Delhi: Jamaat-e-Islami Hind has termed government’s proposed law to penalized triple talaq as a direct interference in Shariah Law and an infringement of their fundamental rights guaranteed by the Constitution.

Commenting on reports that the government is planning to come up with a law that penalizes those who give triple talaq, Jamaat’s President and Vice President of All India Muslim Personal Law Board Maulana Syed Jalaluddin Umari said, "it will be a direct interference in Shariah Law and an infringement of our fundamental rights guaranteed by the Constitution."

Hoping to get justice and favorable judgment from the Supreme Court in the Babri Masjid case, Maulana Umari reiterated Jamaat’s resolve to continue, in cooperation with All India Muslim Personal Law Board, human rights organizations and justice-loving people of all religions, to continue peaceful struggle for restoration and reconstruction of Babri Masjid.

Briefing the media, Secretary General JIH- Mohammed Salim Engineer said: “Recently there have been attempts by some personalities and organizations to intervene in the Babri Masjid dispute by becoming self-appointed mediators. JIH rules out any possibilities for an out of court settlement towards resolution of the Babri Masjid case. Indian Muslim community, AIMPLB and Jamaat-e-Islami Hind await the Court judgment and are committed to abide by it’’. The Vice President of JIH, Nusrat Ali while answering a query about the Babri Masjid said: “Jamaat has three major demands. One implement the Liberhan Commission Report. Secondly, clear the batch of title suits in the Supreme Court and thirdly to expedite judgment in case of demolition and crowd instigation in the trial courts of Lucknow and Raebareilly”


Regarding the upcoming elections in Gujarat, Maulana Umari said: “The volunteers and cadre of Jamaat are carrying out survey of various constituencies and a list of candidates supported by Jamaat in the upcoming assembly elections will soon be announced after consultation with the local chapters of Jamaat in Gujarat”. On the same issue, Salim Engineer said: “Jamaat continues with its oft stated electoral policy of supporting only those candidates who are non-communal, have democratic values, bear good character and are free from corruption’’.


The other issues discussed in the Monthly Press Meet by JIH include Citizenship issue of Assamese Muslims, Government negation of Islamic Banking and Hadiya case.
Email ThisBlogThis!Share to TwitterShare to Facebook