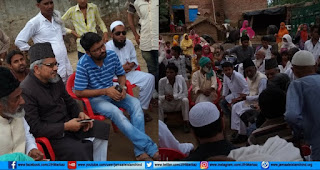 New Delhi, 24 July 2018:  A high level delegation of Jamaat-e-Islami Hind has visited the village of Alwar lynching victim Akbar Khan in Haryana for expressing solidarity with his family and met with his kin and lawyers for collecting the details. Condemning the incident, the delegation expressed condolences and guaranteed every possible help to his family.

The delegation, comprising of Vice President of Jamaat, Maulana Nusrat Ali, Secretary General Mohammad Salim Engineer and others also expressed grave concerns over the increasing incidents of lynching particularly in this area (Alwar). The villagers termed the role of the police as doubtful in this case. According to sources, police also did excesses with Akbar Khan and he was allegedly died in police custody. So far three persons have been held in this case. The delegation demanded to nab all the culprits of this heinous crime as soon as possible. It also demanded for an impartial probe in the case and reasonable compensation for Akbar’s kin. The delegation called for strict action against the policemen who were involved of excesses in this case.

28 years-old Akbar Khan was lynched to death by a group of local people when he was bringing cows for his dairy production. However, his friend Aslam managed to escape from the mob attack.