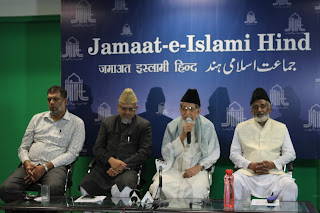 New Delhi; 4th Aug.2018: Jamaat-e-Islami Hind (JIH) has expressed anguish at the growing incidents of lynching and hate crimes all over the country. JIH is planning to meet the President of India along with different faith leaders and will present a joint-memorandum to him over the issue.  Addressing to media persons today at its Press-Meet here, JIH Secretary General, Muhammad Salim Engineer said: “we are approaching different faith leaders for meeting with highest constitutional authority of the country (President of India) over lynching incidents and hate crimes.”  He continued, “the latest incidents being the gruesome killing of Rakhbar Khan of Alwar (Rajasthan) and the public lynching of Mohammed Azam a Hyderabad techie in Bidar (Karnataka). The Bidar incident happened in full public view and the presence of police who could not save Azam’s life. Other cases of hate crimes also continue unabated with a recent report that the beard of a Muslim youth was deliberately shaved and thrashed by miscreants in Gurugram (Haryana). Since the last four years hate crimes and lynching against Muslims and Dalits have increased a lot. Anti-social and criminal elements are becoming daring and emboldened because no serious action has been taken against them and this is creating fear in the common citizens. In fact the provocative language of some lawmakers of the ruling party regarding cow protection and the felicitation of those accused of lynching at the hands of Union Ministers is adding fuel to fire.”

The Secretary General has demanded that the Central government and the state governments must put an end to such incidents of lawlessness and act seriously in maintaining law and order as well as communal harmony in the country which is the basic duty of any government.


Jamaat expresses concern over exclusion of 4 million people in final draft NRC
Expressing deep concern over the exclusion of four million people from the citizenship of India in the final draft National Register of Citizens (NRC) in Assam, Vice President of Jamaat, Mr. Nusrat Ali said, “thus far the NRC has held about 40 lakh people (more than 10% of the state population) of the 3.3 crore applications to be invalid and hence disqualified to be bona fide citizens of India. According to the Assam Accord signed in 1985, anyone who entered the state after 24 March 1971 is considered an illegal resident. For acceptance into the NRC the onus of proof (to prove citizenship) was the responsibility of the applicant. But genuine citizens, who are impoverished and could not maintain proper records because of their homes being exposed to the vagaries of nature, are impacted and now face the brunt of being branded as foreigners. Most of those who could not make it into the NRC were due to minor inaccuracies in their documents.”

Mr. Nusrat Ali demanded the government to look into complaints regarding NRC officials who exhibited bias and discrimination against a particular linguistic community and did not accept their application despite possessing all legal papers. “It is the job of the government to ensure that those left out in the NRC be given ample time and opportunity to carry out the necessary formalities for providing the necessary documents and correct the many anomalies and discrepancies found in the draft NRC wherein the names of children are present but not their parents and vice versa. The other responsibility of the government is to keep a strict vigil on the law and order situation and prevent miscreants and anti-social elements to use the NRC issue as an excuse to engineer riots and large scale violence against the minority community by branding them as foreigners, infiltrators and terrorists. The role of some in the media has also been very unhelpful as they have started a virtual hate campaign against these four million people which is aiding the hate agenda of the communal and fascist forces in our country,” he added.


‘Scrapping section 377 of IPC will lead to moral anarchy’

President of Jamaat Maulana Syed Jalaluddin Umari has expressed dismayed and concerned over media reports that the Supreme Court may revise its opinion and legalize homosexual behavior between two consenting adults and it will not wait for the government to act if any law (i.e. section 377 of Indian Penal Code criminalizing homosexuality) violates fundamental rights.  Maulana Umari said, “it may be recalled that JIH along with leaders of different religious organizations had welcomed the decision of the Supreme Court (delivered on 11 Dec 2013) wherein it has refused to do away with section 377 and persisted with the view that homosexuality is a criminal offence. With that historic decision, the apex court had kept the country from going on to the path of moral degradation.”  He continued, “the IPC correctly describes homosexuality as a punishable offence. Decriminalizing homosexuality and permitting male-male and female-female marriage will destroy the family system and prevent the natural evolution and progress of the human race.”

Maulana Umari further said, “Jamaat firmly believe in the fundamental rights of all citizens and is a strong advocate of freedom and minority rights. However we wish to remind fellow citizens that with freedom comes moral responsibility and no society can accept crimes, vices and anarchy in the name of freedom and personal liberty. We therefore warn the government and political parties that we will never accept this shameful perversion and decadence in values which ignores religious teachings, our culture and the opinion of the overwhelming majority of the people. Such filthy experiments have destroyed human society and violated the rights of women on large scale in certain countries and we should learn a lesson from it.”

He calls on the judiciary, fellow citizens, the government and all political parties to save this country from falling into sexual anarchy, to protect our children from vile sexual predators, to safeguard the rights of our daughters and sisters and prevent the infringement of the fundamental rights of its citizens as abrogating section 377 of IPC will have a cascading effect on the Personal Laws of many religions as well.”
Email ThisBlogThis!Share to TwitterShare to Facebook