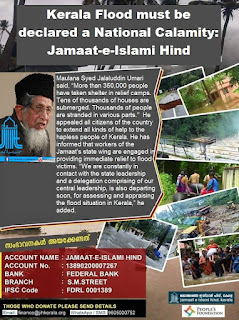 New Delhi, 18 Aug. 2018: Jamaat-e-Islami Hind has demanded that the huge flood in Kerala must be declared a national disaster.

In a press statement, President of Jamaat, Maulana Syed Jalaluddin Umari said, “heavy rain and unprecedented flood and landslides have driven the state into excruciating catastrophe. Many parts of the state are lying under water. People are fleeing in great numbers. More than 350,000 people have taken shelter in relief camps. Tens of thousands of houses are submerged. Thousands of people are stranded in various parts. Even rescue works are wading through a tough time in the present situation. The colossal disaster cannot be overcome by Kerala government or voluntary workers alone. Given the situation, the central government must deploy additional military personnel and provide for more facilities to help in the rescue operation. Prompt attention of the international community must turn to Kerala. Otherwise, news of a horrible tragedy must be feared.

He continued, “losses incurred by the huge flood run into billions of rupees. In fact, Kerala is badly in need of massive reconstruction works. Therefore, the central government must declare a special package.”

The Jamaat leader appealed all citizens of the country to extend all kinds of help to the hapless people of Kerala. He said, “all people are urged to come forward to provide essential relief materials, including food, and financial support. Let’s recall that the people of Kerala were always actively providing support and conducting relief operations whenever there were natural calamities in different parts of the country.”

Maulana Umari has informed that workers of the Jamaat’s state wing are engaged in providing immediate relief to flood victims. “We are constantly in contact with the state leadership and a delegation comprising of our central leadership, is also departing soon, for assessing and appraising the flood situation in Kerala,” he added.

The Jamaat president also offered his prayers for an early relief to Kerala from the current calamity.
Email ThisBlogThis!Share to TwitterShare to Facebook