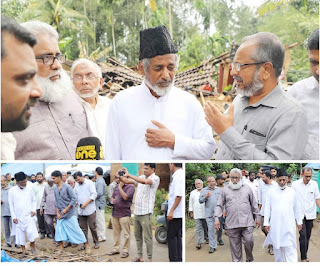 NEW DELHI, 28 August 2018:: The Central leadership of Jamaat-e-Islami Hind led by their Vice Presidents Nusrat Ali and T. Arif Ali visited the flood affected areas of Kerala on the 23rd and 24th of August to review the relief operations carried out by Jamaat cadre and assess the situation in the state that has been hit by massive floods, landslides due to heavy rains. Thirteen districts have been very badly affected leaving more than four hundred dead, tens of thousands of houses submerged in water and lakhs forced to shift to relief camps. The two JIH Vice Presidents reached Calicut on the 22nd August and were received and accompanied by Kerala State President Abdul Aziz, Jamaat workers, leaders of Solidarity Movement and Students Islamic Organization. Jamaat Deputy Ameer Nusrat Ali and Deputy Ameer T Arif Ali toured the following places:

Wayanad district:
It is one of the most impacted districts in flood. Wide and recurring landslides and the rise of water levels in rivers after dams were opened led to the distress in Wayanad. Flood has affected almost 95 percent of the district in one way or the other. There has been widespread loss of agriculture. The team visited mainly Vythiri, Panamaram areas. Lots of houses have been damaged in these areas. Water sources have become useless. Important documents have been lost. The team also visited distress relief cell under Jamaat.

Malappuram:
The team visited NilamboorNambooripotti region in Malappuram district. Many houses were destroyed due to landslide. Loss of agriculture is also huge. Relief Camp was set up in masjid under Jamaat.

Aluva:
Trade and industrial sector is heavily impacted. Educational institutions, storage facilities of shops and hostels got submerged in water.

Mannam :
It is a region near to Aluva in Ernakulam. Water entered hundreds of houses. The team could not visit some regions due to heavy mud. The team visited relief camps working under Jamaat volunteers and discussed the situation with them.  Apart from those mentioned above flood affected regions like Chengannur in Alappuzha district, Palakkad town in Palakkad district, Panayikulam in Eranakulam district, Panthalam in Pathanamthitta district etc. have been affected by flood.

Rescue activities of Kerala Jamaat till now:
1. Organizations working under Kerala Jamaat have done a commendable job.  Especially the (Ideal Relief Wing) IRW volunteers' service even reached those areaswhere the government machinery could not, like Adivasi colonies etc. Hundreds of volunteers are actively engaged in relief activities risking their lives.

2. Relief activities were done in a systematic and planned manner. Relief Camps hosting thousands of people have been running in Palakkad, Panthalam, Eranakulam and Malappuram districts. Volunteers are actively taking part in collecting and distributing material required for basic needs. Appeal for large scale aid and support was done by addressing press meets and other platforms of mass media. Materials collected thus are being distributed in a centralized manner.

3. Distress Relief Cell:
Relief cells have been working 24X7 at district and state level. This has helped to make relief activities efficient. Deploying requisite number of volunteers and resource collection are what Relief Cells mainly do.

(a)   Immediate rehabilitation (short term):
·         To clean houses and wells that has become unusable due to flood.
·         To do urgent repair works.
·         To provide necessary utensils and study materials.
These activities are being carried out by IRW and Human Welfare Foundation Volunteers.

(b) Long term rehabilitation (Future programmes):
Reconstruction of flood affected houses of poor, giving preference to those who do not get governmental help. Aid to those who lost their livelihood/livestock, etc.are included in this project.

After returning back from the visit and assessing the situation of relief operations in Kerala the Central leadership of Jamaat issued an appeal to all sections of society for providing more support and aid for those affected by the floods. Jamaat also appeals to various NGOs and Social Service institutions to come forward for helping out Kerala in its hour of need. The Central government must also intensify relief operations and declare the floods in Kerala as ‘’National Disaster’’ considering the scale of destruction and loss that has taken place in the state.