Breaking: Instant triple talaq to be a crime now with 3-yr jail term as Modi Govt approves it via Ordinance route 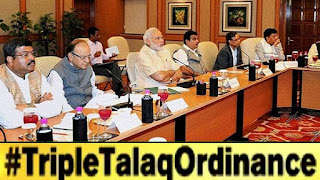 Union Cabinet, chaired by Prime Minister Narendra Modi, Wednesday approved an ordinance making instant triple talaq a punishable offence with a three-year jail term. The move comes after the government failed to push the triple talaq bill or — The Muslim Women (Protection of Rights on Marriage) Bill, 2017 — in the Rajya Sabha during the recent monsoon session owing to lack of consensus among political parties in the House.Under the Ordinance, the crime will be recognised only when the woman herself or her blood relative files a complaint. Second, the case may be dropped if the duo reaches a compromise, but only if the wife approaches the magistrate. Third, the magistrate can grant the accused bail, on reasonable grounds, but only after hearing the wife. The wife will be given custody of the child and is entitled to maintenance — decided by the magistrate — for herself and her children.Addressing the media after the Cabinet meeting, Law Minister Ravi Shankar Prasad said there was a “compelling necessity and an overpowering urgency” to approve the Ordinance. “I have said this before, the issue of triple talaq has nothing to do with faith, mode of worship or religion. It is a pure issue of gender justice, gender dignity and gender equality,” he said. Targeting the Congress for the delay in passing the Bill, Shankar said he approached the party five-six times, but it did not respond. “Such a barbaric inhuman, triple talaq curse was not allowed to be ended by a Parliamentary law because of ambiguity and vacillation of the Congress party for pure vote bank politics.”On the last day of the monsoon session, Vice-President and Rajya Sabha Chairman Venkaiah Naidu had deferred the Bill till the Winter Session, citing the lack of “consensus” in the House. The Bill was passed in the Lok Sabha last December.The triple talaq bill aims to ‘set aside’ the centuries-old practice of instant divorce or talaq-e-biddat by men. It provides for three years imprisonment and a fine for divorcing a woman by uttering “talaq” three times in quick succession. In August, the Cabinet approved inclusion of a provision to allow the magistrate to grant bail to men accused of giving instant triple talaq to their wives. Indian express
https://indianexpress.com/article/india/union-cabinet-approves-ordinance-on-triple-talaq-5364235/