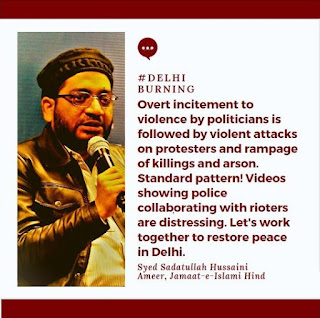 New Delhi: Jamaat-e-Islami Hind’s President Syed Sadatullah Hussaini has expressed concern over the situation in the nation’s capital and made certain specific demands related to the spiraling violence that has led to the loss of 10 lives thus far.

In a statement to the media today, the JIH President said: “The situation in the nation’s capital is extremely worrying and there is an urgent need for all to work together and restore peace and normalcy immediately. We all witnessed the overt incitement to violence by politicians and the manner in which it was followed by violent attacks on protesters. The Delhi Police was unable to control the violence. Armed gangs went on the rampage in a spate of killings and arson in full presence of the police who did not do anything to stop the rioting. Some videos even showed police collaborating with rioters and it was extremely distressing to note the complete breakdown of the law and order machinery that is directly under the control of the Central Government. There are certain specific demands that we have related to the violence in Delhi:

(1)  The politicians who were responsible for provoking violence should be immediately arrested.
(2)  The Chief Minister along with his MLAs, the MPs of Delhi and prominent community and religious leaders must tour the violence-affected areas and appeal for calm. Jamaat-e-Islami Hind has already sent a delegation of community leaders today for the aforesaid purpose.
(3)  Curfew should be imposed in those areas where violence is still ongoing.
(4)  The Delhi Police must act against those breaking the law and resorting to acts of violence irrespective of the citizen’s religious and political affiliation. We have so far seen that the police is acting in an extremely prejudiced manner against the minority community. The police should also take action against their own officers who have indulged in atrocities on innocent citizens, women and children.
(5)  There are some personalities on Social Media and certain TV channels, who are indirectly inciting people towards violence and hatred. They should be booked immediately.
(6)  All anti-CAA protest sites like Shaheen Bagh and others in Delhi should be provided police protection so that they are not harmed by anti-social elements.
(7)  A high level judicial inquiry should be constituted to look into the entire episode of violence.
Email ThisBlogThis!Share to TwitterShare to Facebook