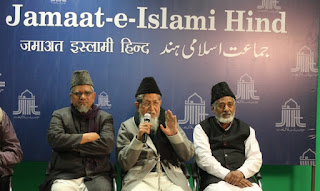 New Delhi 11 Jan. 2018: The President of Jamaat-e-Islami Hind (JIH), Maulana Syed Jalaluddin Umari came down heavily against the proposed Bill related to triple talaq. Addressing to the monthly press meet of JIH at its headquarters Maulana Umari who is also the Vice President of the All India Muslim Personal Law Board said: “the bill (The Muslim Women (Protection of Rights on Marriage) Bill 2017)) is totally against the Quran and the Shariah. No Muslim believes that a pronouncement of talaq three times is null and void. Some Muslims say it is counted as three and some aver that it is to be counted as one. But no Muslim school of jurisprudence says that such a pronouncement is null and void’’. Maulana Umari said: “we do not feel that making a law will help matters. What the government should do is utilize its power to create awareness in the community’’. Raising a pertinent question the JIH President asked: “It is also anti-woman and against the rights of women as there are number of cases where a Muslim wife wants to get rid of her husband immediately. She does not want to continue being his wife even for a day. She wants her freedom by opting out of marriage with immediate effect. Are we not going to prolong her agony by bringing such a law?’’

Earlier the Secretary General of Jamaat-e-Islami Hind, Muhammad Salim Engineer briefed the media on different issues of concern like the Assam National Register of Citizens, Bhima Koregaon violence and situation in the Middle East.

Here in the following is the full text of the press note:

Jamaat-e-Islami Hind is deeply concerned with the publication of the National Register of Citizens (NRC) in Assam. Thus far the NRC has held 1.9 crore people of the 3.3 crore applications to be valid and bonafide citizens of India. The fate of 1.4 crore people still hangs in balance. The final list is expected to come out by July 2018. According to the Assam Accord signed in 1985, anyone who entered the state after 24 March 1971 is considered an illegal resident. However, if a person is accused of being a foreigner, then the onus of proof (to prove citizenship) lies on the accused. But genuine citizens who are impoverished and could not maintain proper records are impacted and now face the brunt of being branded as foreigners. Most are declared foreigners due to minor inaccuracies in their documents. The number of those declared as foreigners has increased dramatically after the BJP government came to power in Assam. Jamaat expects that the government agencies entrusted with the task of preparing the list of legal citizens shall discharge their duty diligently and without bias. Those in power in the state and the Center should also ensure that communal elements are reined in and law and order is maintained in Assam. Jamaat-e-Islami Hind has formed a 3 member committee to look into the entire NRC issue and help those economically and educationally backward to comply with the necessary documentary requirements for citizenship.

Jamaat-e-Islami Hind condemns the well planned and orchestrated violence against Dalits in Bhima Koregaon, Maharashtra by the fascist and communal forces. The Dalits along with other backward communities had gathered in Bhima Koregaon on January 1, as they do every year, to commemorate their victory over the Peshwas in a war that took place in 1818. The divisive forces behind the attack wanted to polarize society along narrow caste considerations to divert people’s attention from the real economic problems of the nation like growing youth unemployment, poor infrastructure, and lack of education and healthcare facilities. Jamaat-e-Islami Hind is deeply concerned at the subsequent breakdown of law and order across the state and the inability of the state government to arrest the real culprits behind the violence. Jamaat appeals to fellow countrymen to maintain peace and unity, be alert against conspiracies meant to divide society along caste and communal lines and demands that the report of the judicial probe, ordered by the state government of Maharashtra,to be made public and those found guilty be awarded strict punishment.

Jamaat-e-Islami Hind feels that the bill introduced by the Central government and passed by the Lok Sabha regarding triple talaq (The Muslim Women (Protection of Rights on Marriage) Bill 2017) is unnecessary, against the Shariah and against the rights of women.This Bill goes against Article 25 of the Constitution of India which guarantees religious freedom and also against the recent judgement of the Supreme Court on the issue of triple talaq. In article 5 of the Bill it is mentioned that the husband shall take the responsibility of maintaining the divorced wife and his children. The question that arises is that when the husband who issues triple talaq will be behind bars, how would he be able to take care of his divorced wife and children? Then after spending three years in jail, how could it be expected that the husband would be able to resume a happy married life with his wife? It is very strange that the government did not deem it necessary to consult the Islamic scholars, Shariah experts, Muslim community and Muslim religious organizations and representatives of Muslim women organizations. After the Supreme Court judgment regarding triple talaq there was absolutely no possibility nor need for such a Bill. According to the legal experts this Bill goes against Articles 14,15 and 25 of the Constitution of India. Jamaat would like to point out to the Government of India that it should not interfere in the Shariah and must refrain from furthering this Bill.

Concerns of Jamaat regarding the national and global situation

Jamaat-e-Islami Hind expresses concern at the deteriorating law and order situation of the country, growing incidents of lawlessness, failing economy and various attempts at weakening the democratic institutions of the country. The protests against the arrest of a person accused of lynching and burning to death of a Muslim laborer in Rajasthan, shows that it was not an isolated criminal act but there is a systematic political force and movement supporting these gruesome killings. The continued organized violence being perpetuated against Muslims, Christians, Adivasis and Dalits shows no signs of abating and here is a systematic effort by fascist forces to create communal polarization in the country. Jamaat expresses grave concern on the state of the national economy. Falling unemployment, fluctuating currency and the improper implementation of GST has severely impacted the economy. JIH demands that the rate of direct tax should be reduced and GST Council must be brought under the purview of accountability. JIH is concerned about the method of ‘’bail in’’ that has been incorporated in the proposed FRDI Bill. Jamaat expresses its disappointment over the rejection by the Government of India to setup ‘’interest free’’ windows in conventional banks as recommended by a special committee of the Reserve Bank of India (RBI). There is now a question mark over the independence and integrity of the Election Commission of India; similar to other institutions like the Reserve Bank of India (RBI), CBI and Central Vigilance Commission.

Jamaat is concerned about the fragile state of the Muslim world and advises the Muslim countries to strengthen the OIC and make it more effective so that the cooperation between Muslim countries may be enhanced in the fields of education, culture, tourism, business, trade, technology and defense. Jamaat feels that in order to attain independence, the Islamic World must free itself from all such military, economic and political treaties and agreements which curtail its freedom and autonomy. JIH expresses concern over the growing political and military influence of Israel and America in the region. Jamaat also expresses concern over the warfare in Yemen and the internal situation of Syria and stresses on the restoration of peace and normalcy in those countries. Jamaat desires the formation of a responsible government through free, fair and peaceful elections in Syria. It demands the release of the Muslim brotherhood cadre, Islam loving volunteers and other political prisoners in Egypt and other Arab countries. The JIH condemns in strict terms the declaration by the American President that Jerusalem (Bait al Maqdis) shall become the capital of Israel and the American embassy will be shifted there. Jamaat appeals to the public to raise its voice against the unjust occupation, illegal construction of colonies and grave injustice meted out to the Palestinians at the hands of Israel. JIH also appeals to the Muslim communality and all peace and justice loving people of the world to work towards the freedom of ‘’First Qiblah’’ and solution of the Palestinian problem using all peaceful and constitutional means.
Email ThisBlogThis!Share to TwitterShare to Facebook