Resolutions passed by JIH Central Advisory Council at its 5 day conclave in Kerala. 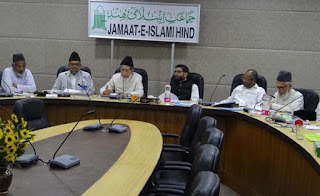 New Delhi, 1st Jan. 2018: The five day conclave of the Central Advisory Council of Jamaat-e-Islami Hind chaired by its President, Maulana Syed Jalaluddin Umari, ended at the Mount Sina School. Palakkad, Kerala. The Council deliberated in detail on the following issues: 1) Proposed bill on triple talaq by the Government of India 2) The deteriorating law and order situation and the failing economy of the country 3) The foreign intervention in the Islamic World 4) The relocation of the American embassy to Jerusalem by the Trump administration.

‘Triple Talaq bill is unnecessary, against justice, anti-Shariah and against the Constitution’

The resolutions that were passed in the conclave said: “The Bill that has been tabled in the Parliament regarding triple talaq is unnecessary, against justice, against the Shariah and against the Constitution of India. The Bill has many internal contradictions and is against the interests and rights of Muslim women. The Bill makes the pronouncement of triple talaq by the husband a criminal offence punishable with a jail sentence of 3 years and a fine. The JIH Central Advisory Council feels that not only is this Bill contrary to Article 25 of the Constitution of India which guarantees freedom of religion but also goes against the recent judgment of the Supreme Court regarding triple talaq. When the Bill does not consider triple talaq to be valid then how can it be punishable? The Bill has also made the husband responsible for the maintenance of his wife and children. The question that arises is that how can a person, who is in jail, be able to take care of his wife and children. The resolution expressed surprise and concern that the government, while bringing a Bill regarding the Shariah, did not consult the Islamic scholars, Shariah experts, the Muslim community and Muslim religious organizations and representatives of Muslim women organizations.”

The JIH Central Advisory Council expressed concern at the deteriorating law and order situation of the country, growing incidents of lawlessness, failing economy and various attempts at weakening the democratic institutions of the country. The protests against the arrest of a person accused of lynching and burning to death of a Muslim laborer in Rajasthan, shows that it was not an isolated criminal act but there is a systematic political force and movement supporting these gruesome killings. The conclave has taken strict notice of the violence being perpetuated against Muslims, Christians, Adivasis and Dalits and feels that there is a systematic effort to create communal polarization in the country.

‘Unemployment and improper implementation of GST severely impacted the economy’

The conclave expressed grave concern on the state of the national economy. The resolution states that the growing unemployment, fluctuating currency and the improper implementation of GST has severely impacted the economy. The resolution demands that the rate of direct tax should be reduced and GST Council must be brought under the purview of accountability. The resolution expressed concern over the method of ‘’bail in’’ that has been incorporated in the proposed FRDI Bill. The JIH Central Advisory Council also expressed concern over the rejection by the Government of India to setup ‘’interest free’’ windows in conventional banks as recommended by a special committee of the Reserve Bank of India (RBI). According to the JIH Central Advisory Council there is now a question mark over the independence and integrity of the Election Commission of India; similar to other institutions like the Reserve Bank of India (RBI), CBI and Central Vigilance Commission. The JIH Central Advisory Council also voiced its concern over the one sided biased role of the media. The resolution condemned the stand of the government regarding its position on the citizen’s right to privacy in the context of mandatory linking of Aadhar Cards and expresses hope that the Supreme Court will stop the government from these destructive policies.