10 March ND: Lok Sabha Elections to be held in 7 rounds from April 11 to May 19, results on May 23; AP, Arunachal, Odisha, Sikkim also go to polls along with LS/No assembly elections in J&K:EC 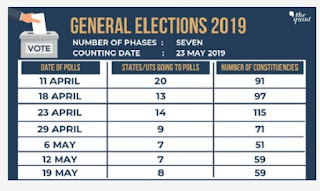 Compiled and edited by Anwarulhaq (Released at: 8:21 PM)
Email ThisBlogThis!Share to TwitterShare to Facebook