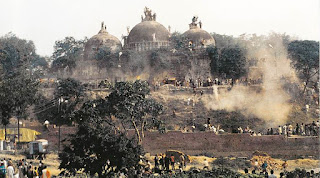 https://www.thehindu.com/news/national/ayodhya-title-suit-appeals-supreme-court-to-rule-on-mediation-on-march-8/article26457068.ece?homepage=true
A 5-judge Constitution Bench, led by CJI Ranjan Gogoi, on Friday will pronounce orders on the limited issue of whether or not to send the Ayodhya dispute for mediation. Bench has pushed "negotiated compromise" as a means to heal hearts and minds. It has said the dispute was a festering wound which has touched the religious sentiments of Hindu and Muslim communities for decades. Justice SA Bobde, on the Bench, put matters in perspective by observing that the court was only concerned about the present state of the Ramjanmabhoomi-BabriMasjid case and not the past history of "Mughal invasion and conquests of Babur". Muslim parties have agreed to give mediation a try, while there is a dissonance of opinions among the Hindu appellants, who have said their faith that Lord Ram was born in the disputed land was non-negotiable. They had even suggested that the court should issue a public notice on whether or not to send the dispute for mediation. "Faith that Lord Ram was born there is not negotiable. But we are willing to crowd-fund a mosque somewhere else," advocate CS Vaidyanathan, for Ram Lalla, the deity, had submitted. Solicitor General Tushar Mehta for the UP govt had also submitted that the path of mediation was both "imprudent and inadvisable." The court has asked the parties to suggest names for mediators "in the event" the dispute is sent for mediation. The court has also indicated that the mediation, if ordered, would be conducted confidentially with no reporting on the process of the mediation, considering the sensitivity of the issue. The Bench had indicated that the mediation, if conducted, would have not just one but multiple mediators. The court had earlier suggestion mediation for a period of eight weeks. This is the time given to the Muslim parties to examine the accuracy and relevance of the Uttar Pradesh government's official translation of thousands of pages of oral depositions and exhibits in the Ayodhya title suit appeals which have been pending since 2010. thehindu
Babri Title case: SC To Pronounce Orders Tomorrow On Whether To Refer Case For Mediation
https://www.livelaw.in/top-stories/ayodhya-babri-title-dispute-sc-to-pronounce-orders-tomorrow-on-whether-to-refer-case-for-mediation-143383

Compiled and edited by Anwarulhaq (Released at: 7:42 PM)
Email ThisBlogThis!Share to TwitterShare to Facebook