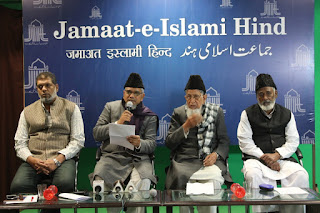 New Delhi: Jamaat-e-Islami Hind (JIH) has lauded the de-escalation between India and Pakistan after the extremely heightened tension prevailing between the two neighboring countries. JIH President  Maulana Syed Jalaluddin Umari along with Vice President Nusrat Ali and Secretary General Muhammad Salim Engineer addressed the media in its monthly press conference here today. The Secretary General of Jamaat-e-Islami Hind while briefing the media said,"We appreciate the de-escalation of the situation. We hope practical steps are taken to achieve this and an atmosphere of peace and amity prevails between the two countries. The tension seems to have reduced perceptibly and both the countries are exploring the process of negotiation and dialogue. We condemn the Pulwama attack that took place on 14th February. However we feel that the manner in which the ruling party tried to exploit the Pulwama attack for electoral benefits is highly appalling and most political parties have objected to it strongly. The security lapses and weaknesses that were exposed during the Pulwama attack should be probed by a high level enquiry and those found guilty of malfeasance should be punished”.

The JIH General Secretary continued saying: “the role of a large section of our media especially the electronic media was highly irresponsiblewhen the situation between the two countries had become very fragile, It looked as if TV studios had turned into war rooms. The media had created a climate of war mongering and mass hysteria, trying its best to push the country into a war with its neighbor. The debates, discussions and news emanating from the TV rooms had become tools for incitement and propaganda. Jamaat-e-Islami Hind expects our media to play a very mature and responsible role in matters pertaining to the safety and security of our nation.”

Briefing the media, the JIH Secretary General said: “we express relief over the acquittal of 11 Muslim men by a Nashik (Maharashtra) Special TADA court, nearly 25 years after they were first charged and arrested. This verdict along with several such similar judgements acquitting Muslim youth of terror charges is a vindication of the long held opinion by Jamaat-e-Islami Hind that Muslim youth are being arrested wrongfully on fabricated charges. JIH demands that the government should withdraw of all false charges against Muslim youth and immediately release all who have been arrested without any solid evidence and incarcerated merely on the basis of suspicion.”

Jamaat-e-Islami Hind in its statement also expressed deep concern over the death of more than 150 tea plantation workers in Assam and about 100 deaths in Uttar Pradesh and Uttarakhand after drinking spurious liquor. The Jamaat demanded the central and state governments to impose a complete ban on liquor for the sake of multi-pronged welfare and development of the country.
Email ThisBlogThis!Share to TwitterShare to Facebook