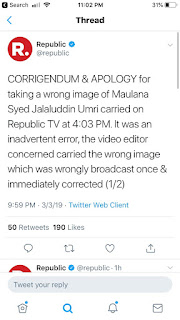 After sedition charges dropped, UP govt forms SIT to probe AMU clash
https://timesofindia.indiatimes.com/city/agra/after-sedition-charges-dropped-up-govt-forms-sit-to-probe-amu-clash/articleshow/68245961.cms
Uttar Pradesh government has decided to form a SIT to probe the violent clash between two groups of AMU students, one of them led by a BJP MLA’s son, that occurred on Feb.12. The clash had led to the slapping of sedition charges on 14 students. However, the charges were dropped later for want of credible evidence.Confirming the move, principal secretary (home) Arvind Kumar said that he has instructed the Aligarh police to form a SIT to investigate the matter, as the four separate FIRs that were registered are interlinked and related to the same incident.The move to form SIT comes a few days after the police withdrew the sedition charges against 14 AMU students.According to sources, the formation of the SIT is the result of the pressure being exerted by the two groups. While there was political pressure, as one of the complaints is from the son of BJP MLA Dalveer Singh, the teachers and students’ union of the AMU were backing the claims of the other group that they had been falsely implicated in the case. TOI
Train coach set on fire to recreate Godhra attack for ‘biopic on Modi’
https://indianexpress.com/article/india/train-coach-set-on-fire-to-recreate-godhra-attack-for-biopic-on-narendra-mod-i5609423/
Vadodara :A burning railway bogie on the narrow gauge between Pratap Nagar and Dabhoi railway line in Vadodara on Sunday morning had many people watching from their rooftops nearby. The burning bogie was part of a film shoot to re-create the attack on S6 coach of the Sabarmati Express on Feb.27, 2002, in which 59 passengers, mainly kar sewaks returning from Ayodhya, were killed, which set off riots across Gujarat.The Indian Express has learnt that the Western Railways and the Vadodara fire department had given permission to shoot the film, which, according to an executive of the production company, “captures the life of Prime Minister Narendra Modi.” It is slated for a social media release ahead of the 2019 elections.Western Railway PRO Khemraj Meena said, “Permission was given to shoot the documentary film here. It was shot at the narrow gauge Vishwamitri railway station. No rail traffic was affected in the process of the shoot and the bogie being used for the shoot was provided by us. It is a mock-drill bogie and was unused.”Indian express

Compiled and edited by Anwarulhaq (Released at: 6:51 PM)
Email ThisBlogThis!Share to TwitterShare to Facebook