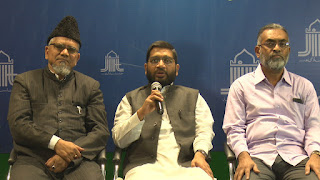 New Delhi: Jamaat-e-Islami Hind has expressed deep concerns over the manner, in which the parliamentary elections are being conducted.

Addressing the monthly press conference here today, Jamaat’s newly-elected president Syed Sadatullah Husaini said, “four phases of the elections have been completed and the way in which politicians have been flouting the model code of conduct (MCC) is quite unprecedented. Especially, deplorable is the use of communal statements by top politicians to divide the electorate on religious lines. These leaders hope to reap electoral benefits by creating division between religious communities as they have nothing worthwhile to show in terms of performance when they were in government. Personal attacks, character assassination and unsubstantiated charges are being levelled by the political class as part of their election campaign, which is lowering the level of political discourse and sullying the country’s image as a mature democracy.”

The President of Jamaat has urged the Election Commission of India to take a firm stand and punish the guilty on the violations of the MCC. He demanded the EC to protect the democratic ethos of the nation by saving the credibility of the elections.

Mr. Husaini has also expressed concern over the numerous reports of EVM mal-functioning. He said, “We support the petition filed in the Supreme Court, seeking an increase in random matching of VVPAT slips with EVMs. It may be noted that some of the most stable democratic countries like the USA, UK, France and Germany have banned the use of EVMs and use ballot paper for casting of votes. As the accuracy of counting of votes, is absolutely critical for the survival of our democracy, the issue of tampering of EVMs needs to be addressed once for all.”

The Jamaat’s President has condemned the recent Maoists attack in Maharashtra’s Gadchiroli district. Expressing condolences for the soldiers and praying for the speedy recovery of the injured, he has demanded a thorough investigation into the incident and possible security lapses with intelligence failure. Mr. Husaini said, “the Pulwama attack in Jammu and Kashmir and now this attack in Gadchiroli are a serious cause of concern for our nation as it shows that the government of India has completely failed in protecting its own soldiers. Nobody in the government seems to be taking responsibility for the incidents.”

The Jamaat leadership also condemned the serial blasts in Sri Lanka on 21 April and termed them as unforgivable heinous crimes against humanity. In a press note, issued today in the press conference, the Jamaat expressed deep sorrow over the tragedy and extended sympathies with the families of the over 250 people killed in the blasts. The Jamaat expressed hope that the government of Sri Lanka will thoroughly investigate these blasts and will do its utmost to bring the criminals to justice. “In the aftermath of these attacks the Sri Lankan government has banned the “burqa” or Muslim women face-veil and some voices have also been raised in our country to do the same. This outrageous demand is not only undemocratic and devoid of any logic but also goes against the basic rights guaranteed under the Constitution of India. Muslim women in India will continue to practice modesty as mandated by their religion and will not be intimidated by such specious demands made by antisocial elements,” reads Jamaat’s statement.
Email ThisBlogThis!Share to TwitterShare to Facebook