Based on evidences, Jamaat-e-Islami Hind expects SC to rule in favour of Babri Masjid ; Expresses concerns over dire situation of economy and Home Minister’s vow to implement NRC across the country


Based on evidences, Jamaat-e-Islami Hind expects SC to rule in favour of Babri Masjid ;  Expresses concerns over dire situation of economy and Home Minister’s vow to implement NRC across the country 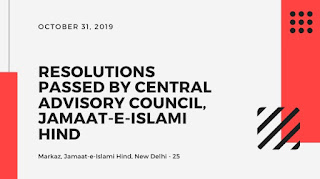 New Delhi:  Jamaat-e-Islami Hind (JIH)’s Central Advisory Council has said it feels that based on witnesses and evidences, the Supreme Court will rule in favour of the Babri Masjid.

Passing resolutions on current issues at its meeting held between 26-28 October at the headquarters in the capital, the JIH’s advisory council has also expressed concerns over the dire situation of Indian economy and the exclusion of nearly 19 lakh people from the final list of the NRC in Assam. It has also expressed concern over the Home Minister’s statement that the NRC will be implemented all over the country.

Full text of the resolutions:

The JIH-Central Advisory Council feels that the lawyers representing the Muslim side in the Babri Masjid dispute in the Supreme Court of India argued their case well. They put forth their claim over the masjid with facts, evidence, and witnesses. They also presented documentary evidence to stake their rights over the masjid. The Council feels that based on these witnesses and evidence, the Supreme Court shall “Insha’Allah” rule in favour of the Babri Masjid. This will enhance the prestige of the Supreme Court. It will also erase the stain on India’s polity, which it carried after the demolition of the Babri Masjid. The Council appreciates the services of the lawyers pleading the Muslim side. The Muslim community and justice-loving citizens of this country are indebted to them. The Council feels that not only the entire country but also the eyes of the entire world are on the highly awaited judgment by the Supreme Court of India on the Babri Masjid. The world shall observe the basis and grounds on which the apex court delivers its judgment. Will it rely on witnesses, evidence, the Constitution of India, the demands of justice or mere claims?

The JIH-Central Advisory Council deems it necessary to acknowledge that the Muslim community of India has conducted itself with a fair degree of patience, fortitude, and maturity regarding this sensitive issue. The Council knows that the community utilized whatever legal and constitutional means it had at its disposal.

The JIH-Central Advisory Council expresses concern over the dire situation of our economy. All economic indices are indicating a downturn and almost everyone is feeling disturbed. The ruling elite of our nation kept denying the failing economy for a long time. Now, that we are on the brink, they have come out of the denial mode. However, they are still reluctant to point out and reflect on the causes of concern related to the economy. They do not seem inclined to find a solution to the receding economy. The government is blaming the sorry state of affairs on cyclical reasons and trying to evade responsibility to steer the economy. We recall that our country was not impacted significantly at the time of the global recession almost a decade back.

The JIH-Council feels that India’s economic growth rate is falling, demand is low, and consequently, production is impacted. This has fueled unemployment. The steps that the government has taken to revive the economy have not proved fruitful as the government took those initiatives without the correct diagnosis.

The Central Advisory Council of Jamaat-e-Islami Hind feels that it is its responsibility to advise those controlling the levers of power and recommends the following to remedy the economic situation of India:

1.    The government must acknowledge its previous mistakes about the economy and study the ways and means to rectify them. For example, a decade back, one of the main reasons why India’s economy remained largely unaffected by the global financial crisis was the high degree of domestic savings by the Indian public and our informal economy. Demonetization broke the back of India’s informal economy. We need to revive our informal economy.
2.    People (consumers) must have purchasing power. Incomes must go up so that there is an increase in demand. Recapitalizing banks for providing more credit to the public and giving tax sops to corporates and industry will be largely ineffective until there is an increase in market demand. It is obvious that incrementing consumer income and encouraging purchasing behavior is the first step towards boosting demand. The economy should also be shaped in a way that there is an equitable distribution of income and money keeps circulating in a manner that benefits the poor.
3.    The trade cycles of the global economy are based on interest and speculative financial instruments and are its specialty. The economy should be reformed in such a manner that an interest-free economy that is devoid of speculation is created. This would be an ultimate and long-term solution for the existing problem.

The JIH Council has no objections to the identification and deportation of foreigners to their native country who are staying illegally in this country. However, we do not need futile exercises like the NRC for this purpose. Based on the experience of NRC in Assam, the Central Advisory Council of Jamaat-e-Islami Hind (JIH) feels that the NRC is a drain on theexchequer, a waste of human resources, and a harmful thing for the nation. This exercise will lead to an increase in communal discord and create fear and unease in certain communities.

The JIH-Central Advisory Council feels that the NRC exercise goes against the well-known standards of justice and impartiality guaranteed by the Constitution of India. If the government has doubts on the citizenship of any person, then the government has to provide evidence for the same. The government is abandoning this responsibility. This attitude of the government is against the basic tenets of justice that it is the citizen’s responsibility to prove his or her citizenship. Those excluded from the NRC have to approach the foreigners’ tribunals (FT) set up by the government. The FTs seem more interested in declaring people as foreigners rather than helping and cooperating with them. In the absence of justice and transparency, this exercise appears to be a deliberate ploy to harass people of a particular community. The government does not have any concrete plan regarding addressing the problems and the human rights of the people whose names did not appear in the NRC list.

The JIH-Central Advisory Council demands that the government should do away with the NRC exercise that is very harmful to the people of India. The government must announce that it will not repeat this exercise in any other state of India so that the present feeling of unease and anxiety found in its citizens ends. The government must immediately rectify the mistakes that have taken place in Assam. The JIH Council deems the Citizenship Amendment Bill (CAB) to be an outcome of a communal mindset, biased and discriminatory. The bill envisages granting citizenship to all foreign immigrants coming from our neighboring countries except Muslims. This goes against the cherished “diversity” found in our country and the core values of our Constitution. The government must refrain from pursuing this legislation.

The Central Advisory Council of Jamaat-e-Islami Hind (JIH) appeals to all the citizens of our nation and especially the Muslim community of India that they should avoid unnecessary fear and anxiety. As responsible citizens, they should update the necessary legal papers and documents in their possession.