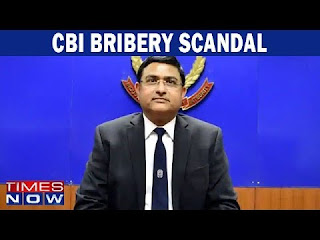 https://www.indiatoday.in/india/story/cbi-may-bury-evidence-against-asthana-r-aw-official-shielded-accused-claims-shunted-officer-1378651-2018-10-30
CBI DSP Ajay Kumar Bassi, who was investigating the allegations of bribery and corruption against CBI special director Rakesh Asthana, has claimed that the agency is trying to bury evidence available against Asthana and other senior officers.Bassi moved a petition in the Supreme Court today challenging his transfer order by CBI interim chief M Nageshwar Rao. Bassi, in his plea, also alleged that R&AW special secretary Samanta Goel was involved in shielding "middleman" Manoj Prasad, a Dubai-based businessman.He also claimed that Samanta Goel was in touch with both Asthana and Prasad's family members after the businessman was arrested on Oct.16.He claimed that calls recorded through phone surveillance and WhatsApp communication accessed after seizing Prasad's phone revealed links between the Prasad brothers - Manoj and Somesh, Asthana, Sunil Mittal - father-in-law of Manoj Prasad - and Samanta Goel."Transcripts are available with the CBI but there is a strong chance that they may not place the same on record," Bassi claimed in his petition before the SC.Bassi was recently removed from investigation in the bribery case against Asthana. He was transferred to Port Blair and the investigation into the case against Asthana was handed over to CBI SP Satish Dagar.He claimed that Dagar "has been instructed to ensure" a clean chit to Asthana and to implicate "honest officers" by claiming that CBI special director was being "falsely implicated". Bassi sought a SC order for a stay on his transfer.He also sought a SC-monitored SIT to probe FIR against Asthana and others. He also demanded that all transcripts and other evidence against Asthana should be placed before the SC in sealed cover."Manner of transfer indicates malafide intent and shows vindictiveness because the fact that the name of Asthana and Sai Manohar were cropping up," Bassi said in his petition.Bassi gave details of the records, including a chart showing "shift" in CBI probe after money was demanded and paid. He claimed that there is a "link between the summons issued to the complainant (Sathish Sana) and illegal gratification obtained by the above named public servants (Asthana and Devender Kumar, and relief provided to Sathish Babu Sana)." "There is a suspicion that the same may be tampered with or destroyed. It is unfortunate to note that the present Investigating Officer has concentrated his efforts not on the allegations of FIR, but has started roving and fishing enquiry in the investigation made by the Applicant," says the DCP.The SC is yet to set a date for the hearing in this case but lawyer Sunil Fernandes, appearing for Bassi, requested the bench to hear the plea on Friday. indiatoday
BI row: Officer Bassi challenges transfer in SC, claims ‘incriminating evidence’ against Asthana
https://indianexpress.com/article/india/cbi-vs-cbi-rakesh-asthana-ak-bassi-transfer-supreme-court-5424912/?fbclid=IwAR3JBVdxCRpQ24eSfxH58aSz3ManY8eSpjO6kEHV23IuuNzkAFn8xJEX3b8
SC orders police protection to Satish Sana, complainant in bribery case against Asthana
https://indianexpress.com/article/india/sc-satish-sana-rakesh-asthana-bribery-case-cbi-5425046/
The Supreme Court today directed Hyderabad Police to provide adequate security to businessman Satish Sana, complainant in the alleged bribery case against CBI Special Director Rakesh Asthana. A bench of CJI Ranjan Gogoi and Justices UU Lalit and KM Joseph refused to stay CBI summons against Sana and also rejected his plea for recording of his statement in presence of retired ex SC judge AK Patnaik.Sana, on whose complaint an FIR was registered against the CBI Special Director, had moved the apex court on Monday seeking police protection and a stay on the notice issued by the agency summoning him for interrogation.PTI
CBI Row: Dy SP, Middleman Remanded To 14-Day Judicial Custody In Asthana Bribery Case
https://www.outlookindia.com/website/story/cbi-row-dy-sp-middleman-remanded-to-14-day-judicial-custody-in-rakesh-asthana-bribery-case/319305
Malegaon blast : Lt Col Purohit, Pragya Thakur, 5 others charged with terror conspiracy, murder 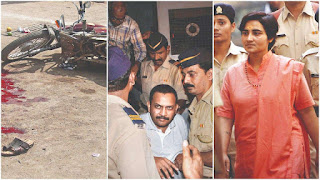 Compiled and edited by Anwarulhaq (Released at: 6:25 PM)
Email ThisBlogThis!Share to TwitterShare to Facebook