Muslims will honor the court judgment on Babri case, others should also do likewise: Jamaat-e-Islami Hind Prez


Muslims will honor the court judgment on Babri case, others should also do likewise: Jamaat-e-Islami Hind Prez 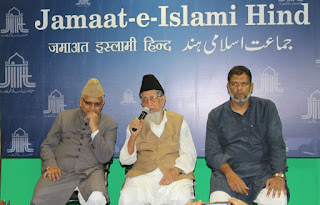 New Delhi (6th Oct. 2018): The President of Jamaat-e-Islami Hind (JIH) and Vice President of All India Muslim Personal Law Board (AIMPLB) – Maulana Syed Jalaluddin Umari voiced serious concern over reports about the VHP trying to pressurize the government to build a Ram temple by 2019. Addressing a monthly press meet organised at its headquarters in New Delhi the JIH chief said: ‘’ all Muslim organizations including Jamaat-e-Islami Hind have time and again reiterated that we will abide by the court judgment irrespective of whether it goes in our favor or against. However the VHP and others are trying to pressurize the government and the judiciary by insisting that a temple be built there without waiting for the outcome of the title suit. This posture goes against the democratic nature of our polity and is leading to polarization of society along communal lines. Is it not commendable that the minority community whose mosque was illegally destroyed is ready to follow what the judiciary says but the other petitioners are showing utter disregard and scant respect by openly challenging the government, the courts and due process of law. This does not bode well for our nation and we urge the government to abide by its constitutional duty and not cave in to the demands of these parochial forces’’.

Earlier the Secretary General of Jamaat-e-Islami Hind, Muhammad Salim Engineer briefed the media regarding rising police atrocities in the country especially in the state of Uttar Pradesh.He said: ‘’the UP police had invited the media to witness an encounter in Aligarh in which two youth belonging to the minority community were gunned down. If the police knew that an encounter was going to take place and therefore invited the media to witness it then it is nothing but extra-judicial killing which goes against all norms of justice and fundamental human rights. Another professional was shot in Lucknow by UP police at point blank range merely for not stopping his car when ordered by a police patrol. These incidents portray the police in very adverse light. Jamaat-e-Islami Hind hopes the government of India takes notice of this rise in police atrocities and restores the confidence of people in the police by implementing policies that guarantee the rule of constitutional law and puts an end to the extra-judicial and extra constitutional ‘’police-raj’’.

Salim Engineer also expressed his concern at the way in which our nation is hurtling towards moral anarchy and the destruction of universal human values. He said: ‘’India is steadily falling into the dark precipice of moral decadence in the name of individual liberty, fundamental rights and the separation of moral and constitutional law. Securing the permission for abortion, surrogacy, live-in relationship and achieving the decriminalization of homosexuality and adultery has shown how a small but powerful minority can hold the entire nation to ransom and impose its immoral agenda on the vast majority who still imbibe traditional moral and religious values that promote the sanctity of life and marriage and who do not want the destruction of the family system as has occurred in the West due to the prevalence and encouragement of this morally detestable social behavior. Jamaat-e-Islami Hind is of the opinion that the people of India are primarily religious in nature and give great importance to traditional values like fidelity in marriage, the right to life (no abortion or feticide) and preservation of civilization through the communion of man and woman via the institution of marriage. There are some forces that want to destroy these values and exploit our country economically causing great damage to the social and moral fabric of our society. We appeal to the people of India to wake up, understand their nefarious design and confront their diabolical agenda before it is too late’’.