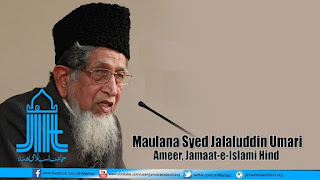 New Delhi: Jamaat-e-Islami Hind has expressed its condolences over the deaths after a powerful earthquake and Tsunami struck Indonesia.

In a press statement today, JIH President, Maulana Syed Jalaluddin Umari said: “we are deeply saddened by the news that a powerful earthquake hit Indonesia and triggered Tsunami which caused large scale death and destruction in the cities of Palu and Sutopo Purwo Nugroho. Media reports and videos show frightening scenes of entire neighborhoods being swept away by the force of mud slides generated by the Tsunami. The death toll has crossed 800 and may be much more according to Indonesian officials.”

The JIH President said, “Jamaat stands with the people of Indonesia in this hour of distress and grief. We pray to Allah to give patience to the bereaved and courage to the survivors in order to help them cope with this calamity. We hope the international community will rise to the occasion and offer its aid and help to Indonesia for relief and rehabilitation of those affected by this tragedy ’’.
Email ThisBlogThis!Share to TwitterShare to Facebook