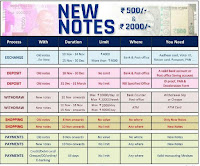 
New Delhi:Finance Minister Arun Jaitley on Wednesday said deposits of now-defunct old Rs 500 and Rs 1,000 currency notes in bank accounts will not enjoy immunity from tax and the land of law will apply on source of such money. A day after the government announced the withdrawal of Rs 500 and Rs 1,000 banknotes in the country’s biggest crackdown against black money, corruption and counterfeit currency, Jaitley said old higher-denomination currency notes have to be deposited in bank accounts to get newer or smaller denomination currencies.PTI
Email ThisBlogThis!Share to TwitterShare to Facebook