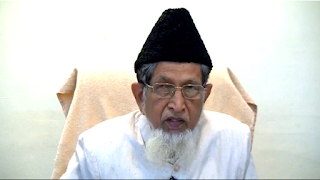 New Delhi, 23 Nov. 2017: Jamaat-e-Islami Hind has condemned the death sentence awarded to former Jamaat-e-Islami Bangladesh MP - Abu Saleh Md Abdul Aziz Mia and five others by the government of Prime Minister Sheikh Hasina Wajid. Maulana Syed Jalaluddin Umari, President (Ameer) of JIH demanded an end to atrocities and injustice being perpetuated against Bangladesh JI. Maulana Umari termed the verdict of the faux tribunal set up by the Sheikh Hasina regime as cruel and unjustified. Many have questioned the credibility of the tribunal and the way it is being used to carry out a scheme of vendetta against JI Bangladesh is highly objectionable.

Maulana Umari said the Shaikh Hasina government is trying to cling to power by crushing the opposition and especially targeting the Jamaate Islami Bangladesh. It has already hanged its top leaders like Maulana Motiur Rahman Nizami. The death sentence to the senior Jamaat leader goes against the natural spirit of mutual cooperation between the government of a Muslim nation and those working for Islam. It appears as if Bangladesh has fallen prey to global conspiracies against Islam and Muslims.

Maulana Umari further expressed grief at the fact that Muslim rulers of Bangladesh are ignoring the Quranic teaching that every individual will be held accountable for every action before Allah and moving on the path of oppression will invite Divine wrath.

Ameer-e Jamaat called upon international human rights organizations and justice-loving people to put pressure on the government of Bangladesh to end its unjustified trend and brutalities and establish an atmosphere of justice and peace in the country.
Email ThisBlogThis!Share to TwitterShare to Facebook