Fresh anti-CAB stirs created unrest in West Bengal and Delhi even as Assam remained under tight curfew to keep a check on rampant violence the northeastern state witnessed over the new law. 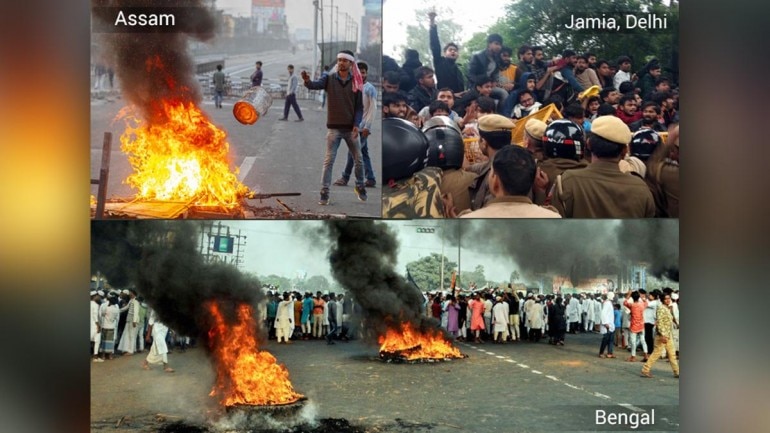 CAB stir rips through nation: Bengal burns, Jamia violence ends in lathicharge, Assam remains on edge
Protests against the amended Citizenship Act ripped through the nation as violent agitations reached West Bengal and Delhi even as Assam, which was on boil on Thursday, remained calm. Anti-CAB agitations were also registered in Aligarh, Ahmedabad and Goa as people demanded an immediate withdrawal of the amendment in the Citizenship Act, which provides citizenship to non-Muslims refugees who have come from Pakistan, Bangladesh or Afghanistan in an attempt to flee religious persecution.
West Bengal Burns
Multiple Muslims organisations in West Bengal gave a clarion call to stage protests against the amended Citizenship Act after the Friday namaz. Peaceful protests against the exclusion of Muslim migrants in the CAB were observed in Kolkata, Arambagh, West Midnapur, North 24 Parganas and South 24 Parganas. However, agitations in Howarah and Murshidabad turned violent. 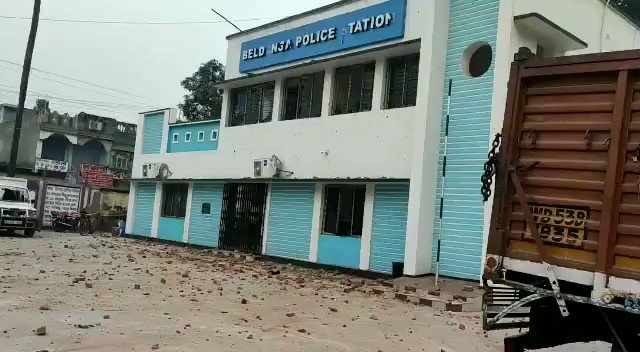 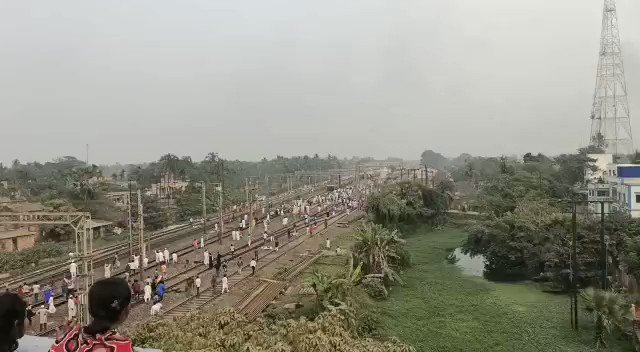 259 people are talking about this
Beldanga in Murshidabad witnessed a major unrest as the protesters vandalised the railway station and the police station. They torched several vehicles and pelted stones at an ambulance. A cop was injured in the violent protests.
The violence affected train services in Sealdah division of the Eastern Railway.
Anti-CAB protesters also vandalised Uluberia railway station in Howrah district. They pelted stones at running trains. Multiple long distance and local trains in the Howrah section were stranded due to the violence.

Indrojit | ইন্দ্রজিৎ✔@iindrojit
Anti-CAB protest turns violent in #Bengal. In Murshidabad stones pelted on an ambulance. Beldanga station vandalised by protesters. Muslim organisations had given protest call across the state after Friday prayers today 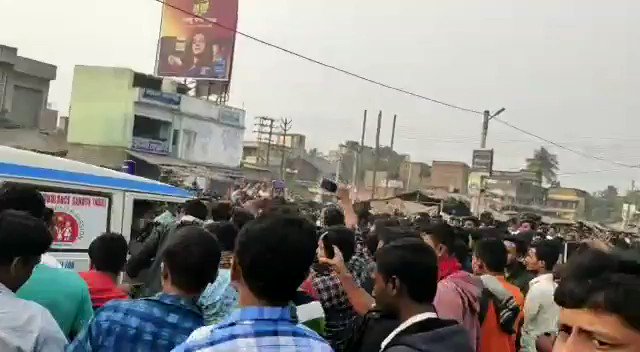 466 people are talking about this
Meanwhile, West Bengal CM Mamata Banerjee reviewed the situation of law and order in the state as several people staged protests against the amended Citizenship Act. To review the situation, Mamata Banerjee held a meeting with Bengal DG, ADG and top other officials.
CM Mamata Banerjee slammed the Centre for bringing in the amendment to Citizenship Act. She termed the CAB 'torture upon humanity'.
"When the house is on fire, one must not consider religion. CAB is torture upon humanity and also on the poor people. They consider the poor people to be a fool. We stand by the poor, farmers and workers," she said. "An elected government is supposed to work by abiding the constitution but they are working only for their personal gain. By trying to remove people out of the country, you yourself will be removed. Just because one has the majority, one cannot do anything they feel on their will."
Meanwhile, Bengal Governor Jagdeep Dhankar has appealed to everyone to maintain peace and calm. 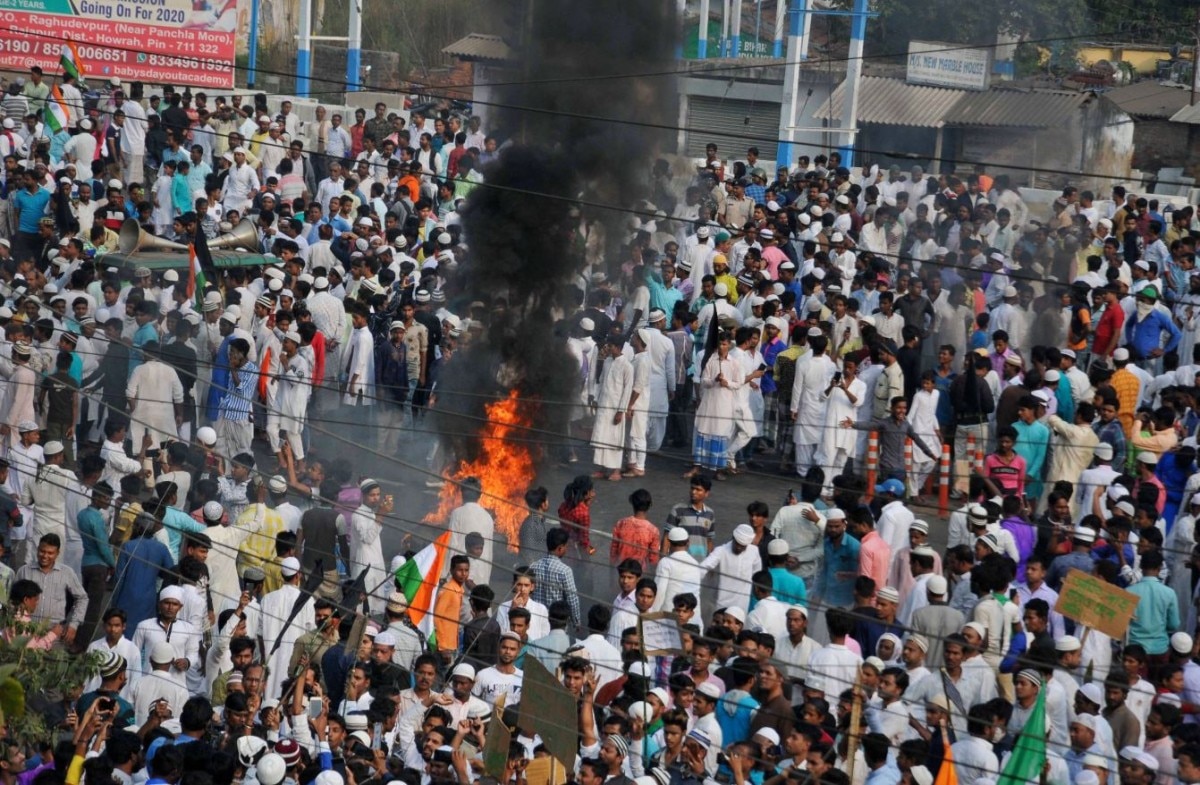 Protesters block the roads in Howrah, West Bengal against the CAB (PTI)
Jamia Protests Rock Capital
National capital Delhi was also rocked by anti-CAB stirs as students of Jamia Milia Islamia University took to streets to protest against the exclusion of Muslim immigrants from the provisions of new Citizenship Act.
Stone-pelting, lathicharge, tear-gas shelling and barricade charging were reported from the scene of the agitation as the student protest turned violent. At least three Delhi policemen were injured and 50 students were detained.
The students had clashed with the police after they were stopped from taking out a march to Parliament House from the university campus on Friday to express their opposition to the amended Citizenship Act.
The protestors tried to then walk towards the Escorts red light but were stopped by the massive police deployment. When the Jamia students tried to jump the barricade there was a scuffle between the protesting students and the police which lead to the lathicharge.
Some protestors present on the ground claimed that the police pelted stones first.
According to Shifa Ur Rehman Khan, President of the Jamia Old Boys Association, "Around 56 students have been injured in the altercation with the police and 60 of them detained at the Badarpur police station. Messages of support are coming in from Jamia alumni from all around the world and the university faculty and employees are also also standing with us in support. The locals have also joined the students. CAB is unconstitutional and our protest shall not end till it has been scrapped."
India Today TV reporter Puneet was manhandled and heckled by protesters agitating against the amended Citizenship Act at Delhi's Jamia university.

What gives cops the right to enter campus & beat peaceful protestors? Did Tadipar order you to do it?

We are proud of Jamia's students. Keep up the resistance. Jai Hind. 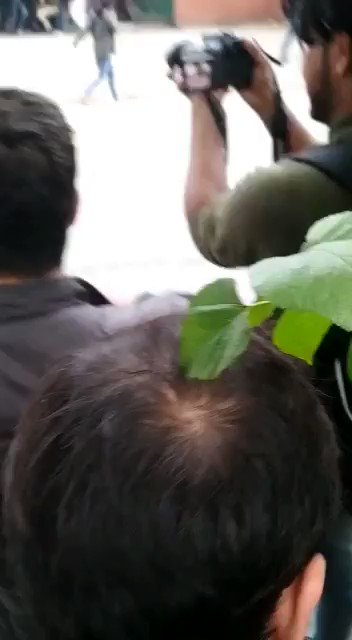 691 people are talking about this
Assam Remains Under Lockdown
Assam, which had witnessed unprecedented violence on Thursday, remained under a strict lockdown as 26 columns of Army kept a check on violence. Few vehicles plied on Guwahati roads as curfew and internet shutdown remained in place.
While several flights to Guwahati airport were cancelled, the passengers who came in on the few operating flights found themselves stranded on the airport as no taxis operated on city roads.
The situation remained calm as the All Assam Students Union (AASU) announced that no protest will be held for a week against the contentious Citizenship (Amendment) Act as the matter awaits hearing the Supreme Court.
At least 106 passenger trains were either cancelled or short terminated by Northeast Frontier Railway (NFR) in view of disruptions in train movement following protests against amended Citizenship Act since Wednesday. Huge crowd walks along the funeral procession of a victim of police firing in Assam (PTI)
Japanese Prime Minister Prime Minister Shinzo Abe's visit to India was postponed. Shinzo Abe was to meet Prime Minister Narendra Modi in Guwahati for a summit on December 15.
Home Minister Amit Shah and a parliamentary panel on home affairs also postponed their visits to Northeast over law and order situation.
Assam CM Sarbananda Sonowal, who had earlier in the day appealed for peace and calm, blamed Congress and communal forces for the ongoing anti-CAB protests in Assam. Talking to PTI, CM Sarbananda Sonowal said that no one who is involved in the violence will be spared.
Aligarh Students Protest
Hundreds of Aligarh Muslim University students and teachers organised separate protest marches and handed over two memorandums to authorities, demanding immediate withdrawal of the amendments made to the Citizenship Act. The protest was marked by a high drama. For over two hours, the district and university authorities managed to stop the students from moving beyond the Bab-e-Syed gate but there was no use of force.
The district administration has blocked internet services in Aligarh district of Uttar Pradesh since midnight in view of the protests planned against the amended Citizenship Act and to ensure peace and order. 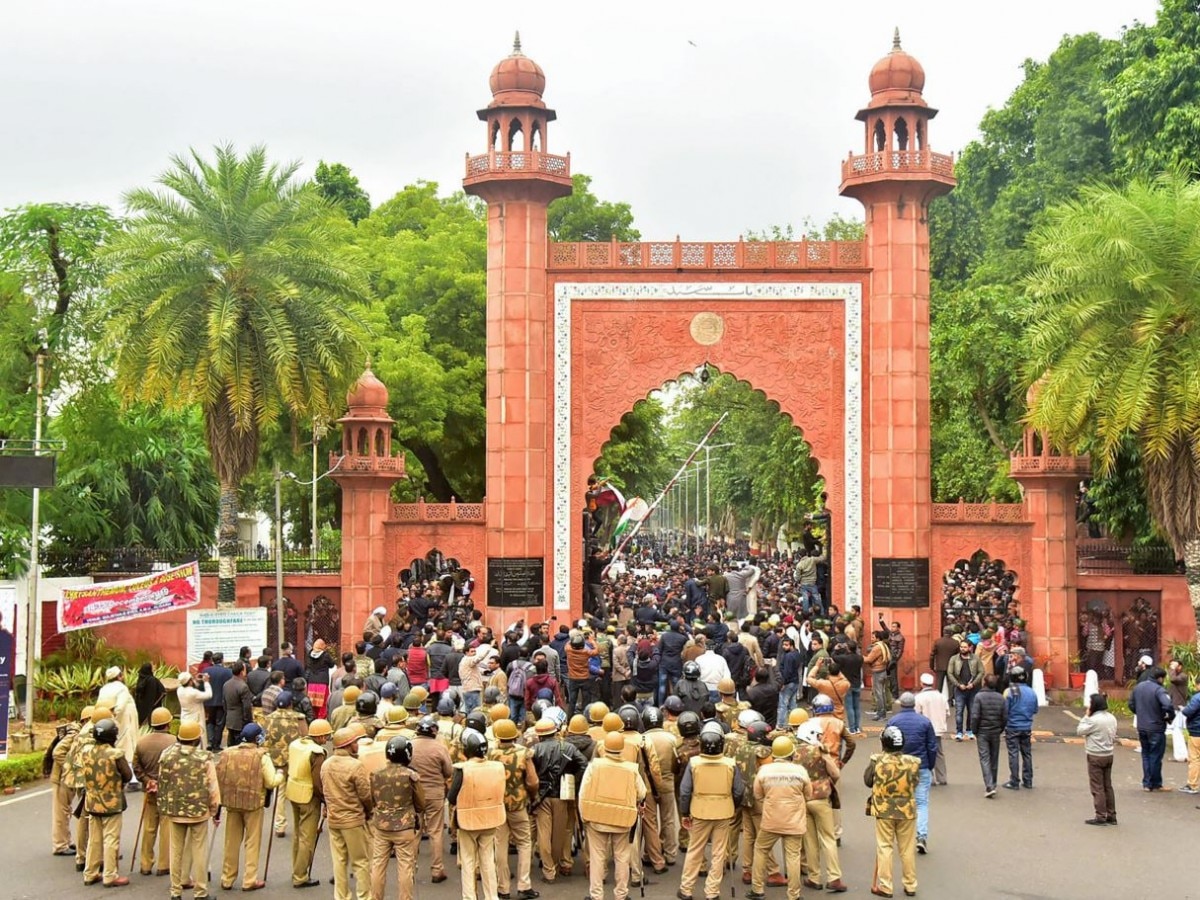 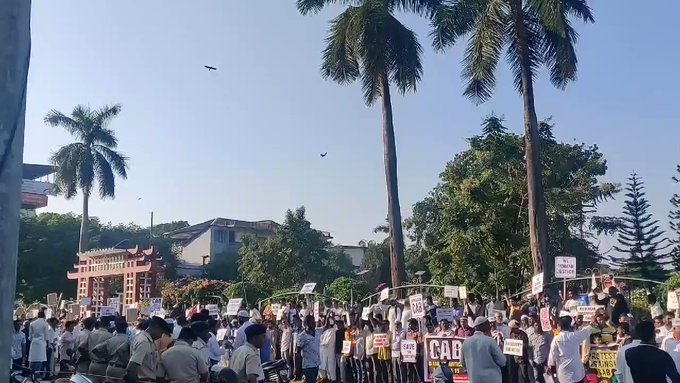 596 people are talking about this
Gujarat’s Ahmedabad also witnessed anti-Cab protests.
One bill, two oppositions
Even if anti-CAB stirs were witnessed across the nation, their purposes or cause were not the same. In fact, they were the opposite.
The Citizenship Amendment Act, 2019 made way for six minority communities Hindus, Sikhs, Jain, Buddhists, Zoroastrians and Christians who came to India from Pakistan, Bangladesh or Afghanistan to escape religious persecution before December 31, 2014 to get Indian citizenship.
While the Northeast is up in arms against the bill as they are against giving citizenship to any migrants refugees or illegals protesters in Delhi and Bengal are demanding the inclusion of Muslims in the ambit of the new law. India Today
=============================================================

According to a latest report the Jamia students detained earlier by Delhi Police were released later in the day. All the students claimed there was an unnecessary violence by the police.

New Delhi: Jamia Millia Islamia alumni came out with a statement after Jamia students were detained on Friday during the protest against Citizenship Amendment Act.
According to Shifa Ur Rehman Khan, President of the Jamia Old Boys Association, “Around 56 students have been injured in the altercation with the police and 60 of them detained at the Badarpur police station. Messages of support are coming in from Jamia alumni from all around the world and the university faculty and employees are also also standing with us in support. The locals have also joined the students. CAA is unconstitutional and our protest shall not end till it has been scrapped.”
We, the alumni of Jamia Millia Islamia, strongly condemn the violence an brutality meted out by the Delhi police against the students of the University on December 13, 2019, in New Delhi. There is ample evidence through photographs, videos and ground reports that confirm that the police deliberately injured several students with batons, tear gas, shoes, and stones.
While many students have suffered serious head injuries and fractures, dozens of them have been picked up by the Delhi police and taken to various police stations in the city.
The students were peacefully protesting against the Citizenship Amendment Act, 2019 passed by the Indian government on December 12, 2019. The Act sets religion as a legal criterion for Indian citizenship. It is not only sectarian in nature but also against the democratic ethos of India.
Many of us have not only acquired excellent professional skills from the University but also learned essential life lessons of co-existing, respecting and upholding the plurality and diversity that exists in India.
It is the democratic right of students to protest. The violent actions of the police on the instructions of the central government are absolute violations of the fundamental rights of Indian citizens.
We demand:
1. Immediate release of the detained students
2. Action and inquiry against the police brutality
3. Rollback of the Citizenship Amendment Act 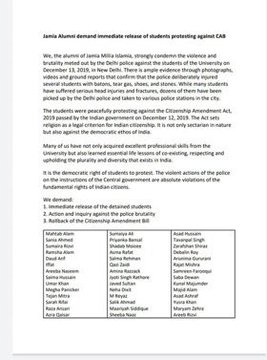 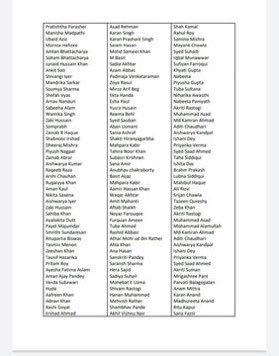 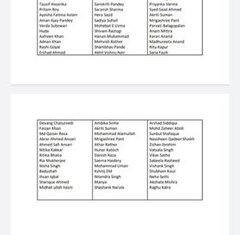 See Newsd's other Tweets
According to a latest report the Jamia students detained earlier by Delhi Police were released later in the day. All the students claimed there was an unnecessary violence by the police.
What happens next in the protest will be decided by students if they take up the protest tomorrow or not with university being closed Saturday. newsd.in
https://newsd.in/caa-protest-jmi-alumni-condemn-use-of-excessive-force-demand-immediate-release-of-students/