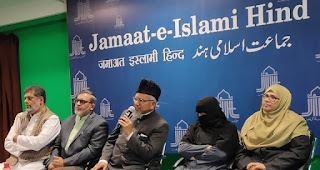 Addressing a press conference here today, JIH Vice President Muhammad Salim Engineer said: “handing over the Babri Masjid site to Hindu litigants was no justice when the apex court itself admitted in its last month’s verdict that the mosque was not constructed after demolition of any temple and that the installation of idols in the mosque 1949 and its demolition on December 6, 1992, were illegal acts. Hence, those accused of demolishing the Masjid should be tried quickly and awarded the appropriate punishment. The slow pace of the trial, despite open evidence, suggests that the government is not serious about convicting those who were behind the illegal act of vandalism and destruction. If the case moves at its present speed then most of the accused will have left the world unpunished, which would be a travesty of justice.”

JIH National Secretary of Community Affairs, Malik Mohtasim Khan also addressed the media and commented: “Jamaat-e-Islami Hind along with the Muslim community and all justice-loving people of the world are highly disturbed with the top court judgment on the Babri Masjid. Many legal experts in our country have passed adverse comments on the judgment, and the Jamaat feels that the demands of justice and fair play have not been met by awarding the land to those who demolished the Babri Masjid.” Backing the Board’s decision to reject the 5 acres of land awarded by the Supreme Court, he said, “Muslims did not litigate for the piece of land but to fight for justice and demand their legitimate rights granted by the Constitution of India.”

Speaking about the recent rape in Hyderabad and the growing number of crimes against women, JIH Secretary of Women’s department, Atiya Siddiqa and Co-Secretary Rahmatunnisa said: “We condemn the brutal rape and murder of a young doctor in Hyderabad and demand that the perpetrators should be punished at the earliest. The number of rapes and crime against women continues to increase and the latest NCRB data reveals that nearly four women are raped every hour while two women are molested every three minutes in India. Current public opinion favors quick, harsh, and exemplary punishment for rapists. The Jamaat wants the perpetrators of rape and assault on women to be brought to justice quickly and awarded maximum punishment under the law. The conviction rate in rape cases is extremely low and hence there is no deterrence for its control. We hope the government wakes up to its duty to provide safety and security for women and live up to its slogan of “Beti Bachao.”

The Jamaat  leaders  have also expressed grave apprehension on the announcement by the Home Minister of India that the NRC shall be implemented all over the country. They said, “we feel it is an exercise in vain and a deliberate diversion of priorities by the government to hide its failures on the economy and other core issues of welfare and development. When there are already known procedures and laws to identify foreigners or illegal immigrants, then putting 135 crore people into difficulty seems unjustified.  It will cause huge financial burden on the taxpayer while many necessities of the citizens are unfulfilled. The failure of the NRC exercise in Assam shows the futility of NRC.”

Criticising the Citizenship Amendment Bill (CAB), the Jamaat leaders said, “ it is against the spirit of our Constitution and discriminatory and goes against the basic idea of India as an inclusive, diverse, secular, and democratic nation envisaged by the founding fathers of our Constitution. It is part of the agenda of communal polarization and we are sure the people of India will not fall prey to such divisive politics.”

The Jamaat leaders also condemned lathi-charge by Delhi police and CRPF on protesting students of JNU. They said, “students’ demand for rollback of their hostel fees, which has been hiked 1000%, is genuine and the JNU administration and HRD Ministry must accept it. The government must provide excellent education at an affordable cost to all sections of society.”
Email ThisBlogThis!Share to TwitterShare to Facebook