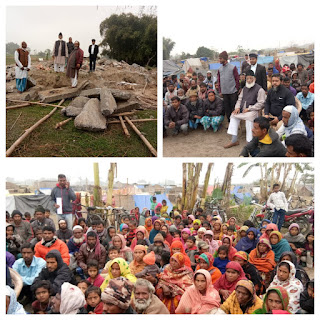 New Delhi: The people of Chotia, Bishwanath-District, Assam have been let down by their own lawmaker, BJP MLA - Padma Hazaraika. They say that 426 families (approximately 1800 people) were evicted mercilessly by the district administration and their homes were demolished on 6 December 2019 at his behest. This is the information that a team of Jamaat-e-Islami Hind, led by National Secretary Mohammed Ahmed and others gathered when they visited the hapless evicted families in Chotia. Mohammed Ahmed was accompanied by JIH Upper Assam Divisional Incharge.- Ishfaqul Hussain and Social Activist Bazlul Basit Choudhury.

After their eviction, more than 426 families are living in two makeshift camps along with their families in the open sky. They are exposed to the elements and living in very severe conditions without food, proper shelter and warm clothing. Nobody has bothered to visit the area and there has been no media coverage. Due to the internet shutdown in Assam their news has not trickled out so far.

The JIH team led by Mohammed Ahmed visited both the camps and met the affected people. He addressed the people and assured them of all possible help from Jamaat-e-Islami Hind. He consoled them and motivated them not to lose hope on Allah. The team also visited the site of their demolished homes. The people are quite harassed as it is torturous to live in harsh winter conditions in open camps. The people in the makeshift camps said that they are getting only one meal a day. The two camps are - 4 No Sirouni  Chapori Camp and Makuwa Chapori Camp.

Upon further investigation, it was revealed that all these people were genuine citizens of India and their names were in the NRC list. It is alleged that they had to face the ire of the local BJP MLA who allegedly got their homes demolished only because they belonged to the minority community and did not vote for him. This happened despite the people having a stay order from the Guwhati Court. After visiting and inspecting the camps and areas the team felt that there was an immediate requirement of relief works (arranging food and shelter material), legal assistance, rehabilitation and re-settlement.
Email ThisBlogThis!Share to TwitterShare to Facebook