news and views from India and across the world

"Instant Triple Talaq and Supreme Court of India" Adv.M.R.Shamshad[Representative of AIMPLB in SC]

Instead of headline-grabbing measures, govt. should find ways to revive economy: Jamaat-e-Islami Hind 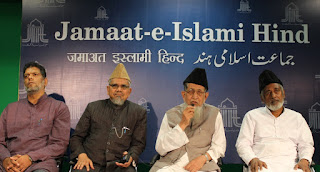 New Delhi, 7 Oct. 2017: Jamaat-e-Islami Hind has expressed deep concerns over the current state of Indian economy whose GDP is falling down steadily, and demanded the NDA government to focus to find ways to revive the economy, instead of headline-grabbing measures.


Mentioning the bad impacts of Demonetisation and GST on the economy, Maulana Syed Jalaluddin Umari, president of the Jamaat while addressing a monthly press conference at its headquarters in New Delhi today said: “The NDA government appears to be clueless and undecided about the measures it needs to adopt for addressing the challenge. The policies of the government are largely to be blamed for country’s economic woes. It must focus to find ways to revive the economy and not be distracted by trivial issues however attractive they may appear to reap electoral benefits and grab media headlines”.

Jamaat leader also expressed concern on the rise in communal incidents in different parts of the country and giving reasons for the rise he said: “Anti-social and criminal elements are becoming daring and emboldened no serious action has been taken against them and this is creating fear in the common citizens.”


The Secretary General of Jamaat Muhammad Salim Engineer while replying to the media on the possibility of Popular Front of India (PFI) being banned by the government of India, said: “we are against this policy of banning organizations as it is undemocratic and fascist in nature. If anybody is found breaking the law then strict action must be taken against the concerned individual but banning of organizations is not correct.’’ When asked about the compulsory singing of the national anthem and if Muslims find anything objectionable in it, the Vice President of JIH Maulana Nusrat Ali said: “there is consensus among Muslims that singing Vande Mataram is objectionable. However the case of national anthem is different and its singing should not be problematic. However Jamaat is against this mentality of suspecting the patriotism of certain sections of the minority community. We condemn the targeting of Muslim religious seminaries (madrassas) by forcing them to recite the national anthem to prove their patriotism.”

Jamaat-e-Islami Hind is deeply concerned about the Indian economy which seems to be in unprecedented trouble. India’s GDP has come down to 5.7% from around 7% since the last three years.  The hurried and ill-advised ‘’demonetisation’’scheme has not yielded its intended results; however it has negatively impactedthe Small and Medium Enterprise (SME) sector and hurt the rural economy.The haphazard and crude implementation of GST has also caused untold misery to small businesses,forcing them to toil in filing returns instead of expanding their business.The housing sector is at a standstill adding to the growing overall unemployment. The steady rise in inflation with regular hikes in the price of diesel and petrol is hurting the common man. Government schemes like Skills Development Programme trained 30 lakh youth but only 10% of them got employed. The promise by the ruling party for creating of two crore jobs annually has remained a pipedream. The banking sector is riddled with huge NPAs (Non Performing Assets) or bad loans and will need a complete overhaul to come back to normalcy. The state of our infrastructure can be gauged by the spate of railway accidents and the tragic stampede on a foot overbridge in Mumbai.
The NDA government appears to be clueless and undecided about the measures it needs to adopt for addressing this challenge. Jamaat feels that the policies of the government are largely to be blamed for country’s economic woes. It must focus to find ways to revive the economy and not be distracted by trivial issues however attractive they may appear to reap electoral benefits and grab media headlines. However Jamaat has noticed that due to intense pressure from the concerned stakeholders the government has announced major cuts in taxes of various items and announced various measures to support exporters and small businesses, three months after the launch of GST.

·         In Gonda (UP) two goons stole a calf, slaughtered it in order to create a communal situation during Moharram procession:
·         In another incident in Guwahati (Assam) a disabled wheelchair-bound rights activist was abused and accused of belonging to an enemy nation for not standing up for national anthem.
·         In Munger (Bihar)  tension prevailed in Jamui town after a 9-year-old boy was injured in stone pelting when an idol immersion procession was taken out in retaliation to the Muharram procession.

·         On September 29, a 30 year old Dalit from Limbodara village; Gandhinagar had alleged in his complaint that he was assaulted by some upper caste men for “sporting a moustache”.
·         A 17-year-old Dalit boy from the same village in Gujarat has alleged that he was attacked with a blade by two unidentified persons while he was returning home from school on October 3. He claimed that he was also attacked on September 25 along with his cousin for sporting a moustache
·         In Ahmedabad a 21-year-old Dalit man was allegedly beaten to death by a group of men belonging to the upper caste community for attending a garba event in Gujarat’s Anand district.
·         The recent killing of Gauri Lankeshin Bengaluru,has galvanized the journalist community who are protesting all over the country.
·         SantanuBhowmik a journalist was lynched in Mandai around 25 km from the Tripura capital Agartala. He had gone to cover a road blocade organized by the Indigenous Peoples Front of Tripura (IPFT).
·         Incidents of target killing and fake encounters are being reported in Haryana and Uttar Pradesh in which youngsters belonging to the minority community are first trapped and later eliminated on some pretext or the other by the state machinery.

Jamaat feels that since the last three years hate crimes and attacks against Muslims, Dalits and journalists have increased a lot. Anti-social and criminal elements are becoming daring and emboldened because no serious action has been taken against them and this is creating fear in the common citizens. Jamaat demands that the Central government and the state governments must put an end to such incidents of lawlessness and act seriously in maintaining law and order as well as communal harmony in the country which is the basic duty of any government.

Resolving the Rohingya issue
Jamaat-e-Islami Hind reiterates its great concern and condemns the continued violence, massacre and genocide of Rohingya Muslims in Burma. The Rohingya Muslims of the Rakhine area of Myanmar are facing extreme oppression and ethnic-cleansing. Jamaat does not support the stand of the Government of India that the Rohingyas are a security threat to the country and should be deported back to Burma. In fact by pursuing such a policy, India would be sending the Rohingya back to the killing fields where they would be slaughtered by the Burmese army. This would be a clear violation of human rights and sully the name of our country in the international community. Jamaat also wants to remind the Government of India to talk to the Burmese Government on the Rohingya problem and pressurize them to restore the constitutional and citizenship rights of the Rohingya Muslims. Jamaat appeals to the Indian government to continue allowing the Rohingya Muslims to stay in India as refugees till the situation in Burma is conducive for their return and their constitutional and citizenship rights are restored. India does not have any ‘’refugee law’’ and hence Jamaat is of the opinion that Indian lawmakers should legislate and devise a comprehensive law regarding refugees so that there is clarity regarding how to deal with the influx of refugees.

news and views around India and the world