20 Muslims convert to Hinduism in Faizabad after being influenced by RSS  leader : ABP LIVE 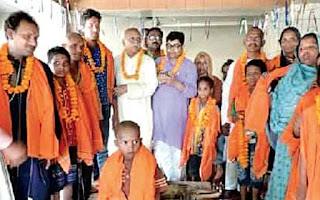 UP: Over 20 people in UP’s Faizabad converted from Muslim to Hindu religion on Monday. The people who earlier were followers of Islam have now accepted Hinduism as their religion after being educated about the same. The conversion took place in Faizabad’s Arya Samaj temple. RSS leader Kailash Chand Srinaivastav educated the bunch of people about Hinduism and its beliefs. Finding the same interesting and being able to relate to the same, they decided to change their religion. Srinaivastav assures no pressure was put on them. Speaking on the same Sangh leader said, “The people earlier were following Hinduism only, which as 25 years ago but later their ancestors started following Muslim as their religion. The family supported each other and helped in conversion of the religion”. Leader reiterated that no pressure was levied for conversion.abplive